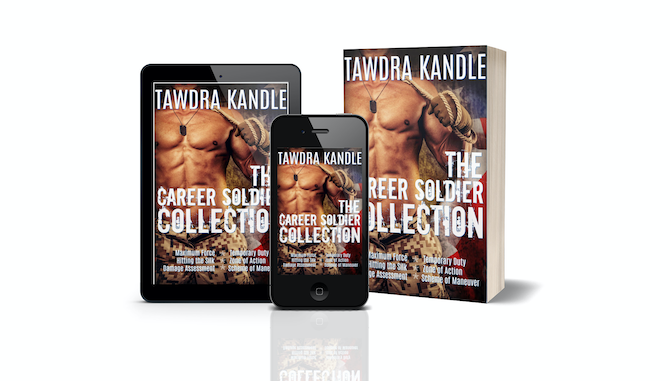 These are the men of the 94th ID. They fight with honor, they defend their nation and their brothers fiercely, and when they love, they do it with single-minded passion.

Max Remington has never been anything but a soldier. The oldest son in a family that served our nation for generations, he’d never considered any other path. The army is his life, his home and his one true love.

Until he meets Samantha Crewe.

Kade Braggs grew up wild and free, surfing on a California beach without much ambition, until an impulsive decision led him into joining the Army. What started out as a joke turned into a career, and now he's a company commander, leading several platoons of soldiers. Still, Kade does it all on his own terms; he plays as hard as he works, and having a good time is non-negotiable.

Until he meets Leah Samson.

Once upon a time, Delia Rollins was an Army wife, until the unthinkable happened. Now as a young widow and school teacher, she's vigilant about protecting her heart. Her number one rule for the future? No more military men in her life. She can't handle the risk.

Until she meets Shaw Kincaid.

Jake Robinson is the most easy-going soldier in his battalion. For the last few months, he’s been watching his friends find love, commitment and even babies . . . but he knows that path isn’t for him. Been there, done that and got the scars to prove it.

Until he meets Harper Drummond.

When a freak accident seriously injures Derek McTavis, he’s afraid that his Army career might be over. Even after he returns to Fort Lee, he has a hard time recovering and returning to his old lifestyle, despite the encouragement and support of his friends.

And then he meets Tasha O’Hare.

Scheme of Maneuver
Owen Hughes is an enigma among his friends. He’s a man of few words, and although he enjoys his share of fun with women, he’s never found anyone worth making an effort to pursue. With all of his friends now married or in committed relationships, Owen feels like a lone wolf, the last man standing. He’s not sure if that makes him a hero or a loser.

And then he meets Jacey.