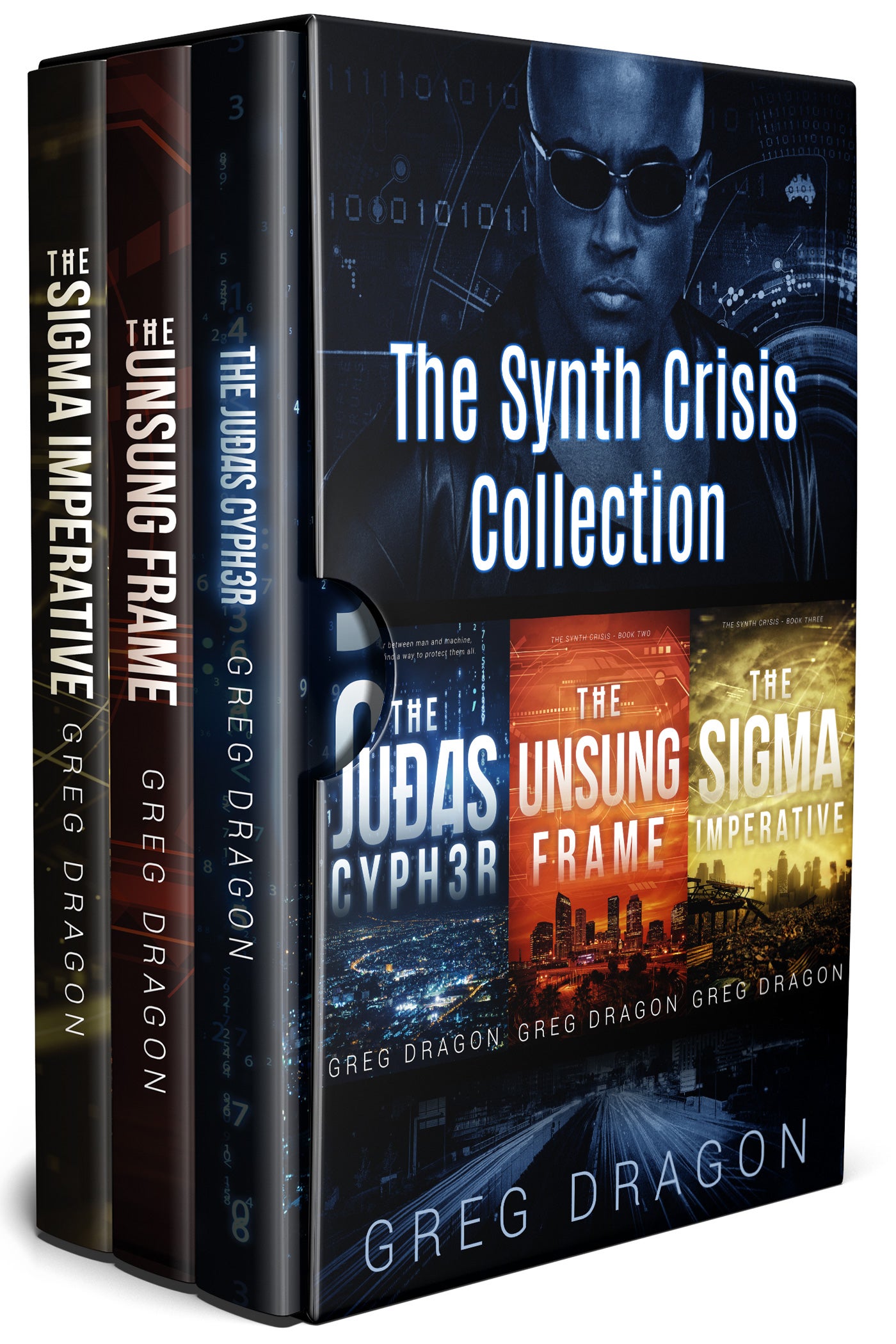 On Sale
$4.99
$4.99
Added to cart
The first three books in the Dhata Mays futuristic detective series.

The Synth Crisis series is a set of sci-fi technothriller stories with an enticing noir vibe. If you like robust future worlds, action-packed cyberpunk, and mysteries that keep you guessing, then you’ll love Dhata’s electrifying misadventures.


BOOK ONE: THE JUDAS CYPHER


When machine murders man, one detective is the world’s only hope of preventing an all-out-war...

Dhata Mays has become used to living on the fringes. Unlike most of humanity, the detective treats the synth population with the respect they deserve. But when a gruesome murder points to a synth as the perpetrator, Dhata must do everything in his power to discover an explanation before the case goes public.

In a race against time, Dhata discovers a scheme involving cypher hackers, synth prostitutes, and a pair of rival gang bosses that could tear the city apart. When the case puts his loved ones in harm’s way, the investigation becomes personal. For Dhata to keep the uneasy peace, he’ll have to track down the murderers himself, but no one said he had to take them alive.


A war between humans and synthetics...

In a futuristic Tampa Bay, skiptracer Dhata Mays and his sidekick, Lur Diaz, are on a job investigating a cheating lowlife. But after a deadly explosion and the woman who hired them disappears, nobody is safe. Suddenly, everyone is under suspicion, and the police are no longer there "to serve and to protect."

Now, it's up to Dhata to take matters into his own hands and uncover a deep-rooted plot to escalate the tension between the humans and synths. He must stop the battle before it's too late. But is the truth too big for a small-time skiptracer to handle alone?


Human/synth relations are suffering...
And Dhata Mays is stepping in.

Two years after stopping a wicked serial killer, former detective Dhata Mays is called in to investigate a kidnapping. After all, he’s the new “fixer” in town. But when Dhata discovers that there’s more at stake than a missing woman, he knows he’s up against an evil entity that might destroy everything.

With help from his partners, Dhata uncovers a plot that not only involves genocide, but a brand new model of android. It's the final hour and time is running out, but can Dhata Mays pull a hat trick, and bring an end to the synth crisis?
You will get the following files: