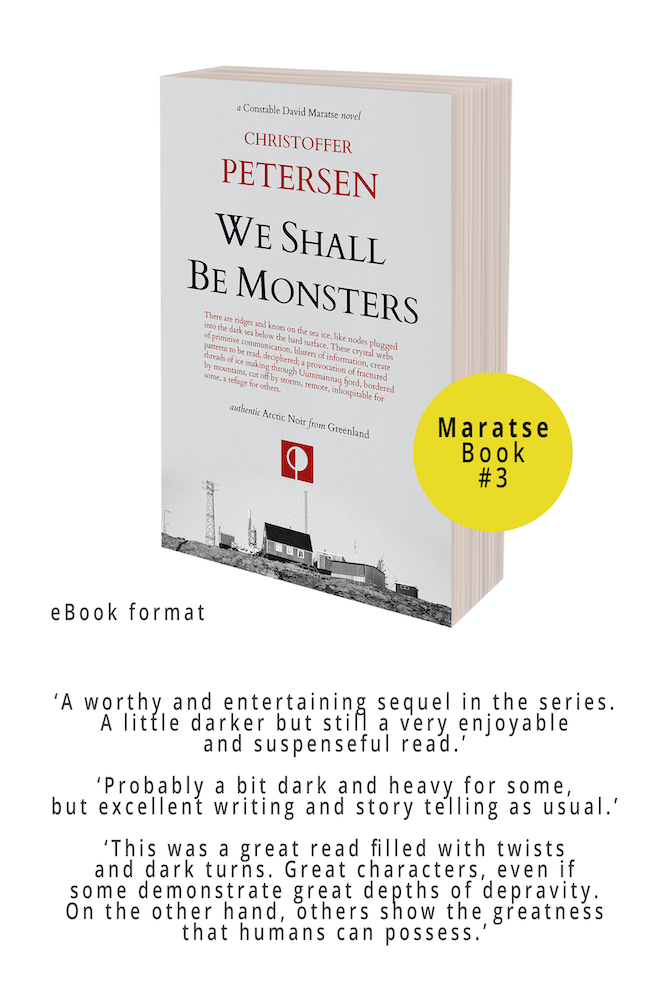 We Shall Be Monsters

By Christoffer Petersen
An extreme environment calls for extreme methods if retired Greenlandic Police Constable David Maratse is to catch a sadistic killer.

When the body of a missing teenager is discovered, Police Sergeant Petra Jensen’s stiff and bloody clothes are found beside a nearby hole in the sea ice. The local police assume she is dead. The suicide note, written by Petra, confirms it.

The investigation is closed and her clothes are buried in a small casket in the pre-cut grave – one of seven dug before winter in the graveyard above Inussuk, a small Arctic settlement on the exposed west coast of Greenland.

For retired Police Constable David Maratse, the funeral is just a formality, something to be endured, if only to convince the press, the politicians, and the police, that Petra, one of Greenland’s finest officers, is dead.

As the hunt for the teenager’s killer resumes, Maratse harnesses his dog team, and slips away under the cover of the winter night to begin his search for Petra, free from the prying eyes of the press, far from the restraints of the law.

Set during the sunless and tortuous Greenlandic winter, on the sea ice over 600 kilometres north of the Arctic Circle, We Shall Be Monsters is the third and the darkest to date of the three books in the Greenland Crime series featuring retired Police Constable David Maratse.

Pick up We Shall Be Monsters to begin your adventure to the darker side of Greenland today!