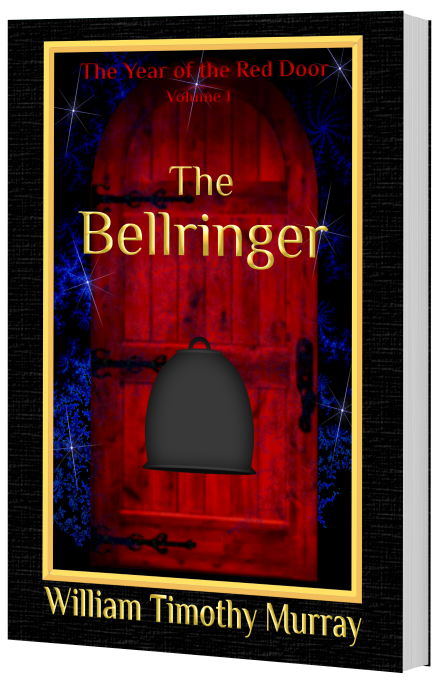 Volume 1 of The Year of the Red Door

In the course of a single year, a humble store clerk will become the most powerful king who ever ruled.   The epic fantasy you've been waiting for begins...

For centuries, the Great Bell was silent...

It remained undisturbed, nearly forgotten by history, hidden away in the ruins of an abandoned fortress. The enchantments within its iron slumbered, its secrets protected by silence. Until someone discovered how to ring the Bell, other secrets would remain safe.

One day, while running an errand, a young store clerk took a wrong turn, then another, until he found himself deep within the old fortress where the Great Bell waited.

It waited for him.

And when the hapless clerk rang the Great Bell and released its enchantments, his troubles began.

For he had become the Bellringer.

He claimed it was all an accident, that he did not mean to ring the Bell. Fate, it seemed, thought otherwise, and proof of the Bellringer's destiny began to emerge just as the world spiraled into war. Revolt and treachery worked to break apart the Seven Realms. Armies were on the march. The faraway King, obsessed with his own power, seemed unwilling or unable to prevent the looming catastrophe.

Perhaps a new King was needed...if only someone could penetrate the secret of the King's power and take the throne before it was too late. It was foretold that the person who discovered the True Name of the King would become the next King. But who was capable of such a thing?

About The Year of the Red Door:

The Year of the Red Door has begun, and four months have already passed by. This is the story of the last 244 days.

Uncanny things are taking place in the world, mysterious powers are stirring, and there are signs of coming change. Like pieces on a game-board, ancient forces are moving into position, gathering strength. Many sense the portents and see the signs, but few know their meaning. Fewer still understand what must be done. But who is there to do it?

In only 244 days, six intrepid travelers must cross thousands of miles, to the far edge of the world, to find a place that may not even exist. A legendary place called Griferis where a new king may be prepared, trained, and judged for worthiness. It is their bid to find that place, to discover the secret Name of the King, and to make one of their companions the new King. But hope is thin, and time runs out. Can the Name be found? Can the Usurper use it to take the throne? And will it make any difference? It already seems too late.

In the spirit of J.R.R. Tolkien and Charles Dickens comes a new heroic tale, a story of ageless love and brave determination, of tragic loss and the hope of redemption. During this quest, mythic powers arise from the ancient past, fate collides with destiny, and the world edges swiftly to its final destruction or to its ultimate fulfillment. Only the Bellringer can tip the balance of fate, but the world is almost out of time...