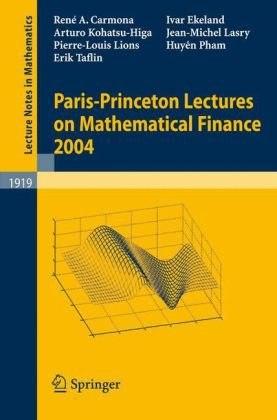 On Sale
$9.99
$9.99
Added to cart
This is the third volume of the Paris-Princeton Lectures in Mathematical Finance. The goal of this series is to publish cutting edge research in self-contained articles prepared by well known leaders in the ﬁeld or promising young researchers invited bytheeditors.Particularattentionispaidtothequalityoftheexposition,andtheaim is at articles that can serve as an introductory reference for research in the ﬁeld. The series is a result of frequent exchanges between researchers in ﬁnance and ﬁnancial mathematics in Paris and Princeton. Many of us felt that the ﬁeld would beneﬁt from timely exposés of topics in which there is important progress. René Carmona, Erhan Cinlar, Ivar Ekeland, Elyes Jouini, José Scheinkman and Nizar Touzi serve in the ﬁrst editorial board of the Paris-Princeton Lectures in Financial Mathematics. Although many of the chapters involve lectures given in Paris or Princeton, we also invite other contributions. Given the current nature of the collaboration between the two poles, we expect to produce a volume per year. Springer Verlag kindly offered to host this enterprise under the umbrella of the Lecture Notes inMathematicsseries,andwearethankfultoCatrionaByrneforherencouragement and her help in the initial stage of the initiative. This third volume contains ﬁve chapters. In the ﬁrst chapter, René Carmona demonstrates how the HJM approach to the construction of dynamic models can be used for different ﬁnancial markets. The original proposal of Heath, Jarrow and Morton was framed for the world of Treasury bonds, but its applicability was extended soon after its publication. However implementation of the same modeling philosophy in the case of credit and equity markets had to wait. Purely for pedagogical reasons, this chapter starts with a review of the original HJM approach to ﬁxed income markets. Then, the recent works of Sidenius, Pitterbarg and Andersen and Schoenbucher oncreditportfoliomodelingarepresented.Finally,thelastpartofthe chapterexplainshowCarmonaandNadtochiydevelopedtheprogramoutlinedafew years ago by Derman and Kani for equity markets. The second chapter, by Ivar Ekeland and Erik Taﬂin, also develops the HJM framework. The emphasis here is on the optimal management of bond portfolios, that is, on Merton’s problem of expected utility maximization. The authors introduce a special class of assets, the rollovers, which have a constant time to maturity,

and describe the bond portfolios as a combination of rollovers rather than a combination of zero-coupon bonds, as is usual in the literature. The advantage of this approach is that a rollover does not mature, in contrast to a bond. By considering bond portfolios as a combination of rollovers, one brings them close to stock portfolios, which do not mature either, and one paves the way for a uniﬁed theory of money markets and equity markets. In addition, the authors derive explicit formulas for the optimal portfolios, at least in the case when the drift and volatility are deterministicprocesses.Theseadvantagescomeataprice:amathematicalsettingmustbe found, which will accommodate the curves describing the term structure of interest rates, and allow them to vary randomly, subject to possibly inﬁnitely many sources of noise, while remaining sufﬁciently smooth. The Musiela parametrization (that is, takingtimetomaturityinsteadofdateofmaturityastherelevantvariable),although itisnaturalinthatcontext,considerablycomplicatesmatters,foritintroducesanadditional(anddiscontinuous)termintheequationsofmotion.Roughlyspeaking,that chaptercomplementstheprecedingone:takentogether,theyhighlighttheﬂexibility and generality of the HJM model, as well as its many unexplored consequences. The third one is written by Arturo Kohatsu-Higa and is based on a short course given in Paris in November and December 2004. It reviews recent results on models for insider trading based on the theory of enlargement of ﬁltrations. After reviewing the case of an insider having extra information given by the knowledge of the distribution of certain random variables, the author concentrates on the case when the insider beneﬁts from almost sure additional information, leading naturally to the use of anticipative calculus. This review can be viewed as a natural companion to the chapter delivered by Fabrice Baudouin in the ﬁrst volume of the series. The style of thischapterispurposedlypedagogical,emphasizingdiscretetimeapproximationsas awaytoillustratethedifferencesbetweenanticipativeandnon-anticipativecalculus, and exercises with solutions as a way to isolate proofs of technical results. ThefourthchapteriscontributedtobyPierreLouisLionsandJeanMichelLasry. It is concerned with the inﬂuence of hedging on the dynamics of the underlying asset price. The problem is completely solved in the case of a large investor. The results are based on a detailed analysis of liquidation and indifference prices studied via the solutions of non-standards stochastic control problems. This paper is more of a technical nature, and reads more like a research article than an introductory review. However, theimportance oftheissueandtheoriginalityofthemathematical approach fully justify its inclusion in the series. The last chapter is concerned with applications of large deviations to problems in ﬁnance and insurance. It is contributed by Huyén Pham. Large deviation approximations and importance sampling methods are discussed in the context of option pricing. Credit risk losses and portfolio benchmarking are also analyzed with the tools of large deviations.
You will get a PDF (2MB) file