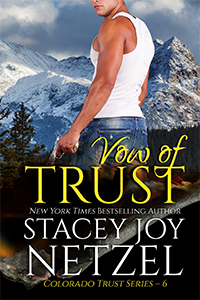 Not everything that happens in Vegas stays in Vegas.

Cassie Blake turned her back on her brothers in the middle of a family scandal, but before she can return to Colorado and make things right, she must pay her debt to a scheming Sin City loan shark who’s decided he wants her instead of the money. A desperate gamble to get her life back on track takes an unexpected turn when she runs into a familiar face from home.

Sheriff Lawson Graves is in Las Vegas for a new job and a fresh start after the woman he hoped to build a future with married one of Cassie’s brothers. When he discovers the beautiful blond is in way over her head with a loan shark whose infatuation has turned to obsession, Lawson proposes an offer of protection to stack the deck in her favor—and his.

With undeniable chemistry sizzling between them, happily ever after could be in the cards—until the lawman’s vow to keep Cassie safe puts both their lives in the hands of a madman with nothing left to lose.

“She's done it again! Strong characters with funny banter but underlying tension, suspense, and romance all in the same book. Right when you think you've figured it out she surprises you with a twist again!” ~Ruby, Amazon reviewer