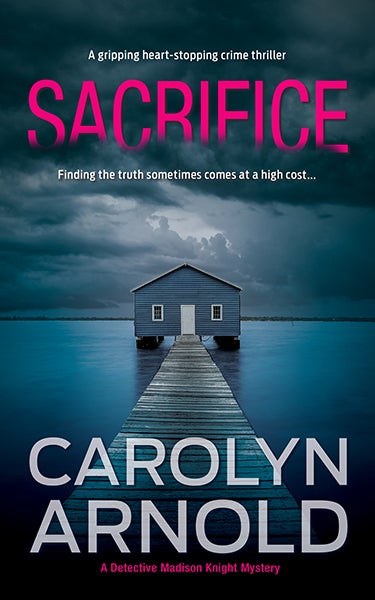 “An intense, thrilling page-turner sure to satisfy any fan of the [crime] genre.” –Goodreads Review ⭐⭐⭐⭐⭐

She read him stories and tucked him at night. She’d kiss his forehead and wish him “pleasant dreams.” But all this is in the past and nothing more than a haunting memory as she looks into his unseeing eyes… Her baby is dead.

Martha Cooper has been living with a horrible secret for years, but it all came crashing down when the son she was forced to walk away from turns up dead. Now a grown man of twenty-two, Chris was found washed up on a riverbank during a winter thaw, and it’s Detective Madison Knight who rushes to the crime scene. Martha is quick to point Madison to her ex-husband and the boy’s father, Marcus Randall, for his murder.

But Marcus isn’t about to go down without a fight. As a wealthy and corrupt business tycoon, Marcus pulls on his friendship with the police chief, and the two of them hinder Madison’s investigation. What they fail to see is the resistance only makes Madison more suspicious that Marcus has something to hide. She’s also not about to be bullied into silence—even if it pits her against two of the most powerful men in the city. But Madison will seriously need to consider whether a father betrayed his own son or if it was someone else who killed Chris. If she’s going to find out the truth, she’ll need to follow the evidence and push through all the lies. But Madison quickly discovers that nothing comes without personal cost. Not even justice.

“An exciting fast-moving modern police-procedural thriller with a realistic, feisty female lead.” ⭐⭐⭐⭐⭐
“I loved Detective Madison and her dogmatic pursuit for justice!” ⭐⭐⭐⭐⭐
“A truly awesome story.” ⭐⭐⭐⭐⭐
“Fast-paced and well-written, this book was hard to put down.” ⭐⭐⭐⭐⭐
“This story was captivating. I had a difficult time putting it aside.” ⭐⭐⭐⭐⭐
“Lots of twists and turns.” ⭐⭐⭐⭐⭐
“Kept me on the edge of my seat.” ⭐⭐⭐⭐⭐
“If you like fast-paced, no-holds-barred mysteries with a two-fisted protagonist, you will want to read Sacrifice.” ⭐⭐⭐⭐⭐
“A brilliant crime thriller with twists and turns at every corner.” ⭐⭐⭐⭐⭐