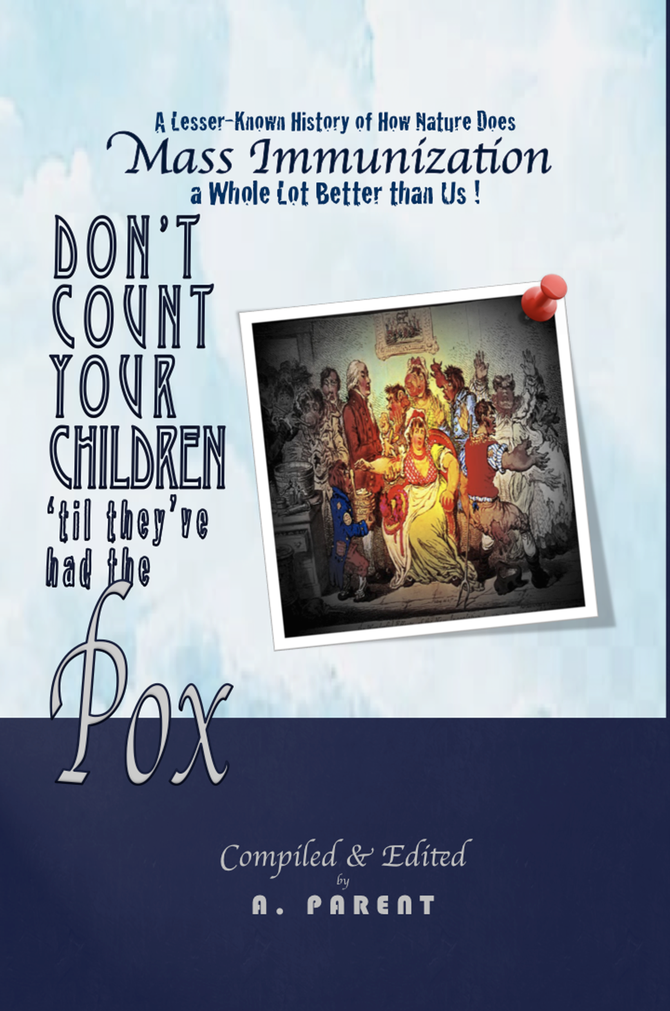 SURVIVING Some of the Deadliest Plagues Known to Humanity... (Antidote to Corona Virus/COVID-19?) BEGIN READING NOW FOR FREE

“…the more you know about the past, the better you are prepared for the future.”


Kindle Version Look Inside the Book

The direct quotes given throughout this study – augmented by original mortality data compiled and edited by A. Parent, reveals a lesser-known history of the dramatic decline in deaths from a whole plethora of pathogens that once plagued our developing nations and its probable cause. I.e., a natural universal biological phenomenon of ancestrally acquired robust resilience to dying from once deadlier contagions throughout the generations.

The significance of this being that, whilst our health officials are expecting the plagues of old to return at any moment and are poised nervously armed with whatever vaccines they can throw at them, it would appear that our immune systems having very long-term ancestral memory have not forgotten how to battle against such opportunistic invaders of the past and it now looks highly likely that almost all of us would survive even if some of the deadliest contagions returned today to plague us in their original colours.

This, therefore, also has implications for our more modern and firmly entrenched belief that we eradicated at least some of these bugs and, obviously, with our current mass vaccination strategies that are so firmly entrenched and becoming near-universal, we are not currently following nature’s schedule of childhood natural immunization as a result. Thus, we assess the consequences of this situation in the context of the above.

In essence, after reviewing all the relevant evidence for when, how and to what degree we have attempted to protect against infectious diseases at a population level versus nature’s method of full exposure, this study reaches the inescapable conclusion that Nature has done a significantly better job of natural mass immunization down through the generations and across the entire world in line with our respective levels of development, a whole lot better than us.

The moral of this story is that it looks like our ancestors were counting more of their descendent children (that’s us) because they had the (actual) Pox and just about everything else going in the way of infectious diseases and we were healthier as a result. That was until we began to intervene in the natural generational immunity cycle – but, the protection afforded by our mass vaccination efforts being so short-lived – ironically, maybe helping to restore this remarkable immunization cycle once again.

All in all, it is hoped that this study will go some way to alleviating our unnatural phobia regarding the germ or pathogens of old returning, and go some way to restoring our faith in Nature so that this may inform a more natural health focused future.

-2- Cholera, the Disease that Inspired Bram Stoker’s Macabre Aspects of his Novel ‘Dracula’!

-3- Dysentery Was Often Bloodier Than The Wars & Battles Themselves

-6- TB-Almost Everyone Was Infected Unbeknownst To Themselves

PART TWO: Would We Survive the Return of Some of Deadliest Contagions in the 21st Century?

-7- What Ever Happened the Spanish Flu, and Would We Survive its Likes Again?

-8- Scarlet Fever Returns, But it is a Whole Lot Less Lethal PART THREE: Don’t Count Your Children ’til They’ve Had the Pox & Just About Every Childhood Infection Going

-9- Don’t Count Your Children ’til they’ve had the Pox – Even After their Vaccinations!

-11- Was Polio Ever Eradicated or was the Natural Immunity Cycle Temporarily Interrupted?

-12- Measles, Mumps & Rubella: Throwing the Baby Out with the Bathwater?

CONCLUSION: Did We Get the Germ Theory Completely Wrong & What Does This Mean for Our Present public health policies and our future?

Epilogue: Learning from Our Past So That We Might Be More Protected in the Future