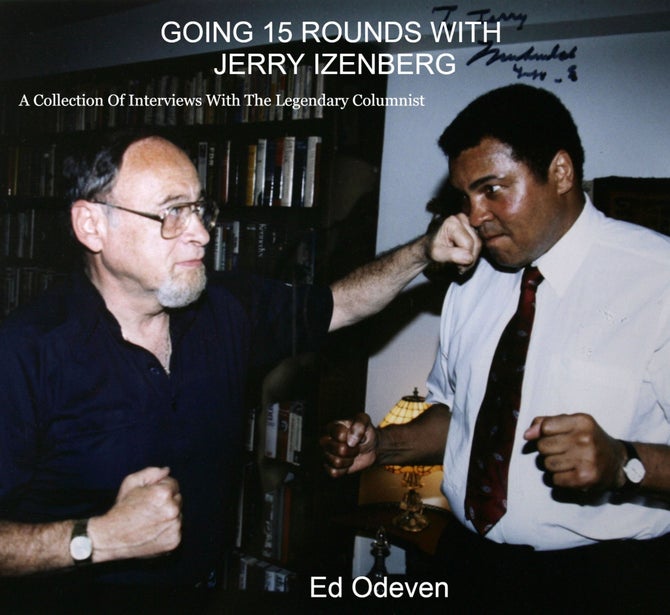 Going 15 Rounds With Jerry Izenberg: A Collection Of Interviews With The Legendary Columnist

Jerry Izenberg’s career as a newspaper reporter and columnist spans generations. From the early 1950s to the present day, he has written about championship teams and Olympic icons, baseball and football superstars and boxing legends. Along the way he became one of the best American sports columnists.

“Going 15 Rounds With Jerry Izenberg: A Collection Of Interviews With The Legendary Columnist” highlights Izenberg’s career and some of his favorite stories. The timing of the book’s release coincided with Izenberg’s 90th birthday in September 2020.

In a series of conversations with Izenberg, his illustrious career is discussed. Some of the seminal moments of his childhood and adulthood are highlighted with vivid details.

A gifted storyteller, Izenberg talks about his close friendship with Muhammad Ali, about meeting Nelson Mandela at the 1992 Barcelona Olympics, about the one question he always wanted to ask Cuban leader Fidel Castro. He reminisces about his father’s love for baseball, and about his own realization as a young man that he wasn’t an aspiring jazz musician despite his love for music. Yes, music played a pivotal role in his life as a writer. But how? That’s a topic explored within these pages.

He shares tales about newspaper mentors and colleagues, including Red Smith and Shirley Povich, Jim Murray and Stanley Woodward, Dick Young and Jimmy Cannon. He reflects on racism and race relations in the 20th century through the prism of sports. He discusses courage and heroism, using Olympic wrestler Jeff Blatnick and baseball player Jim Eisenreich as examples. He recalls his visit to Grambling University, a historically black university, to observe coach Eddie Robinson’s football squad when he was the first white reporter to do so. He brings horse races from the 1970s to life, reminiscing about Secretariat and Canonero II.

Jerry Green, Dave Anderson, Ira Berkow, John Schulian, Dave Kindred, Wallace Matthews and Jeremy Schaap, among others, offer their assessments of Izenberg’s career and what’s made it special. They also weigh in on Izenberg’s place in the pantheon of American sportswriters.

Not strictly an interview book, this project curates a wide mix of opinions from and about Jerry Izenberg to help people develop a broader understanding of his background, numerous career accomplishments and commitment to the community. He was the founder of Project Pride, which provided scholarships to college-bound students from his hometown of Newark, New Jersey, and also provided a range of sports and academic activities for students for three decades.

In short, it's an anecdotal biography about a legend in his chosen profession.