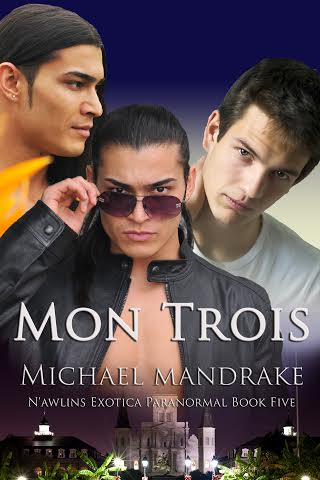 One final test for Ryland Durand…

Ryland Durand has slayed his vampire father Gren’s killer, overcome his own fears of being in the public eye, and currently seeks to further his writing career by putting his work in print. Now however, he faces yet another challenge; convincing Dale Mooney and Ryder to be his eternal lovers.

Ryder has been at his right hand since day one, but feels Dale Mooney is infringing on their close relationship spanning over three centuries. Ryder asks for Valios’ assistance to get Dale Mooney out of the picture permanently, but fails.

Dale cannot deny he’d prefer to be alone with Ryland, but is willing to go along with the idea. He feels less important to Ryland and wishes for him to clarify his place in the union.

Due to Ryder’s attempt on Dale’s life, Ryland decides to leave for an extended vacation so Dale and Ryder could figure things out on their own. Ryder’s jealousy over Ryland nearly backfires, causing Dale to make a life threatening choice.

Will the three of them overcome these huge hurdles or will jealousy permanently destroy their eternal union?