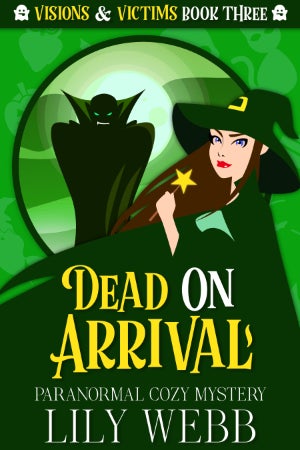 By Lily Webb Mysteries
Not everything comes up roses…

Psychic innkeeper Selena is excited about giving the grounds of Kindred Spirits Inn a much-needed revamp — until her new gardener comes down with symptoms of vampirism. The only problem? He shows no signs of a vampire bite.

Unable to explain the Transylvanian transformation, Selena decides to uproot the truth — and what she discovers about the gardener’s life and work delivers a sudden rush of blood to her head.

But Selena may have bitten off more than she can chew because the culprit who nipped her nurseryman in the bud will do anything to guard their secrets.

Will Selena’s supernatural senses unearth the attacker’s identity? Or will they sow the seeds of her demise?

Dead On Arrival is the third book in the Visions and Victims series of paranormal cozy mysteries. If fatal flora, vindictive villagers, and supernatural shenanigans get your wand waving, then you’re sure to fall under the spell of this new spinoff series that expands Lily Webb’s magical universe.

Buy Dead On Arrival to continue conversing with the spirits of Starfall Valley today!