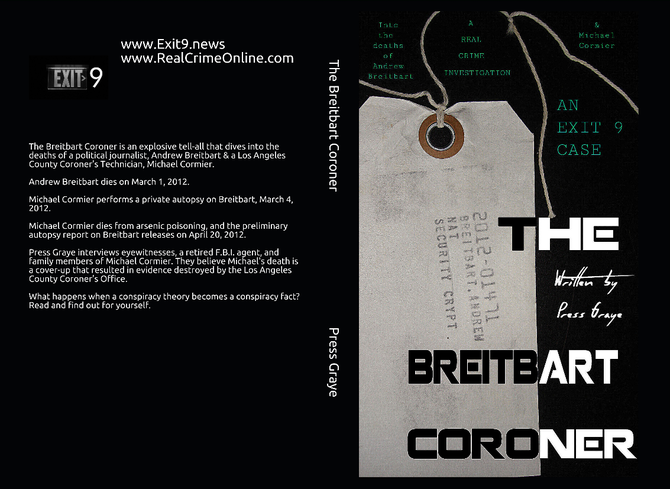 The Breitbart Coroner - Into The Deaths of Andrew Breitbart & Michael Cormier

By EXIT 9 INVESTIGATIONS
YOU WILL RECEIVE AN AUTOGRAPHED COPY OF THE BREITBART CORONER. 169 PAGES. FREE SHIPPING.

On March 1, 2012, conservative journalist, Andrew Breitbart died under mysterious circumstances. Breitbart had stated weeks before that he would release video of President Obama on March 1, showing his radical political roots. On April 20, 2012, a Los Angeles Coroner's Tech, Michael Cormier died from arsenic poisoning. How are they connected? This book explains it.

I'm Press Graye, an investigative writer and filmmaker. The Breitbart Toe Tag is a true crime investigation that examines my journey into a Los Angeles County Coroner's Technician, Michael Cormier, and his unsolved death by arsenic poisoning.

Confidential Sources, eyewitnesses, a retired FBI Agent, and family members of Michael Cormier provide testimony and physical evidence to prove that Michael performed a private autopsy on conservative journalist Andrew Breitbart. They believe Michael's death is a cover-up that resulted in evidence destroyed by the Los Angeles County Coroner's Office.

This is the only book that includes in-depth information about Andrew Breitbart's last days leading to his death.

"Everything you are about to read has been checked and rechecked for accuracy. Mike's story is not over. There are still many answers that need to come. I believe that there are still chapters to be added to this book, and as the truth unfolds, they will be. The entire Cormier family and I wish to thank Press Graye for all that you have put into this and for not giving up on our brother when so many others have. You will hold a special place forever in our hearts." - Ed Cormier