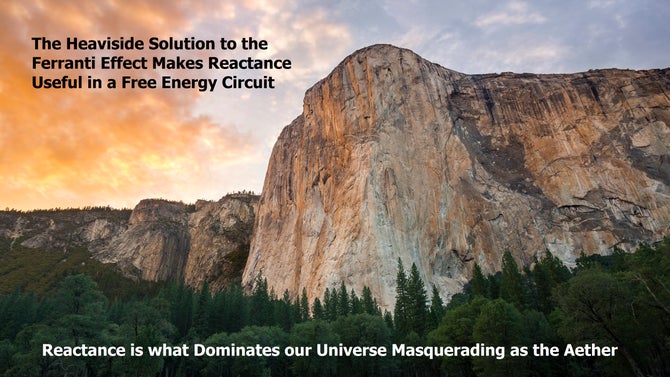 By Vinyasi
This newly revised text replaces my prior text, entitled: "Extending the Range of Electric Vehicles by Maximizing their Amp-Hours". It includes most of the prior text while including a little bit more plus a new title and cover art to reflect an alteration of my views on this subject.

The trans-Atlantic cable problem of the late 1800s was not successfully solved by the brute force of increasing voltage at the sender's end. It was solved, firstly, by Oliver Heaviside mathematically modeling the problem as the Telegrapher's Equations. This led to wrapping an insulated copper wire with iron ribbon, or iron wire, and insulating this entire package to become the very first use of coaxial cable.

The problem was not with the electric field propagating down this transmission line. That field had no problem retaining its force throughout the entire length of transmission.

The problem, instead, was with the magnetic field not keeping up with the electric field. It takes both to make electricity in a framework of time plus the spatial presence of a wave guide, ie. a transmission cable in this case, to incorporate both fields at equal amplitudes throughout the entire transmission length.

This is achieved by boosting the magnetic field, without the use of “repeaters” (which were not invented until 1956), by what is commonly called (nowadays) “loading the signal with an inductive load”.

A common example are “loading coils” placed at the base of aerials inline with their reception of distant signals to boost their magnetic component relative to their electric.

This is the “Heaviside Solution to the Ferranti Effect”. The latter is the name given to one of several proponents of the use of increasing the brute force of voltage, alone, to solve this transmission challenge.

This is also the solution to the dilemma of “what's it good for” whenever attempting to convert negative power factored, A/C electricity (born of two contrary zero power factored parent waves) into something useful, ie. a positive power factor of useful energy. The solution, to making use of reactionary power (born of the union of capacitive and inductive reactance), is to add a magnetic component, ie. an iron-cored transformer placed in between the load and the reactionary buildup sections of a “free energy” circuit.

This proves the point – which electrical engineers fail to recognize – that reactionary power is more than merely useful for temporarily borrowing it to energize coils. It can also power consumer appliances with real power instead of imaginary fictions courtesy of The Man of La Mancha!

“To dream the impossible dream...”