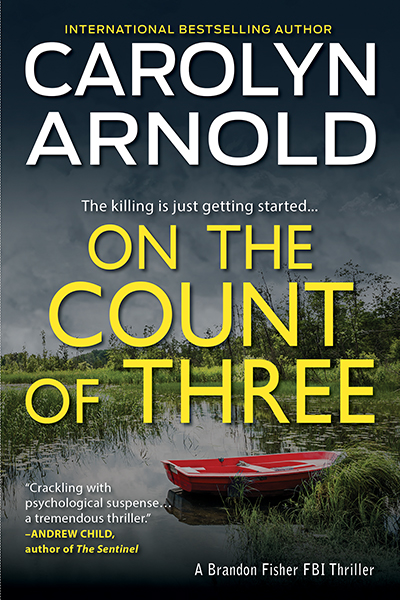 On the Count of Three

By Hibbert & Stiles Publishing Inc.
He had it planned out to perfection. She was weak and pathetic, past the point of fighting for her life. She must know she couldn’t win, and soon it would all be over…on the count of three.

A woman is reported missing in Miami, Florida, and Detective Kelly Marsh starts the investigation into her disappearance. But Marsh soon recognizes notable similarities between this woman’s history and that of two victims, brutally murdered, their cases still unsolved. Marsh’s gut tells her the killer may be back, and she’ll need assistance from the FBI to take down this monster. Special Agent Brandon Fisher and his team with the Behavioral Analysis Unit jet south to coordinate their efforts with the local detective.

With evidence mounting that the missing woman’s fate is looking much the same as the other victims, Brandon and the others must work at their highest level of efficiency and cunning if they’re going to stand a chance of saving her. After all, as they quickly come to realize, they’re hunting a killer with an insatiable appetite for blood. And if the FBI team isn’t careful, one of them may not make it out of Miami alive.

"Taut, tense, crackling with psychological suspense and bursting with authentic detail, On the Count of Three is a tremendous thriller. Fans of Criminal Minds will love it and be left hungry for more." –Andrew Child, author of The Sentinel

Join the hundreds of thousands of readers who have already taken the plunge into a series that will take you into the minds of the most heinous and disturbing serial killers the world could ever imagine. Buy this international bestselling book today and hunt a serial killer alongside the FBI!

What readers have to say about On the Count of Three: