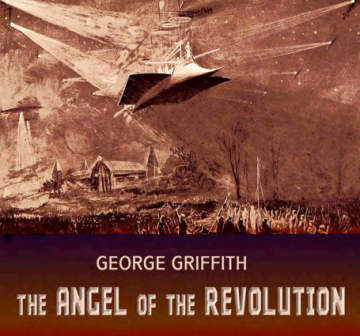 The Angel of the Revolution Mp3(zip)

By Chrnaudio-book
The Angel of the Revolution: A Tale of the Coming Terror (1893) is a science fiction novel by English writer George Griffith. It was his first published novel and remains his most famous work. It was first published in Pearson's Weekly and was prompted by the success of The Great War of 1892 in Black and White magazine, which was itself inspired by The Battle of Dorking.

A lurid mix of Jules Verne's futuristic air warfare fantasies, the utopian visions of News from Nowhere and the future war invasion literature of Chesney and his imitators, it tells the tale of a group of terrorists who conquer the world through airship warfare. Led by a crippled, brilliant Russian Jew and his daughter, the 'angel' Natasha, 'The Brotherhood of Freedom' establish a 'pax aeronautica' over the earth after a young inventor masters the technology of flight in 1903. The hero falls in love with Natasha and joins in her war against society in general and the Russian Czar in particular. It correctly forecasts the coming of a great war, but in pretty well all other respects widely misses the mark of the real events that followed. Nevertheless, it is a gripping and exciting story of intrigue and plot interwoven with love and romance played over a background of world war.