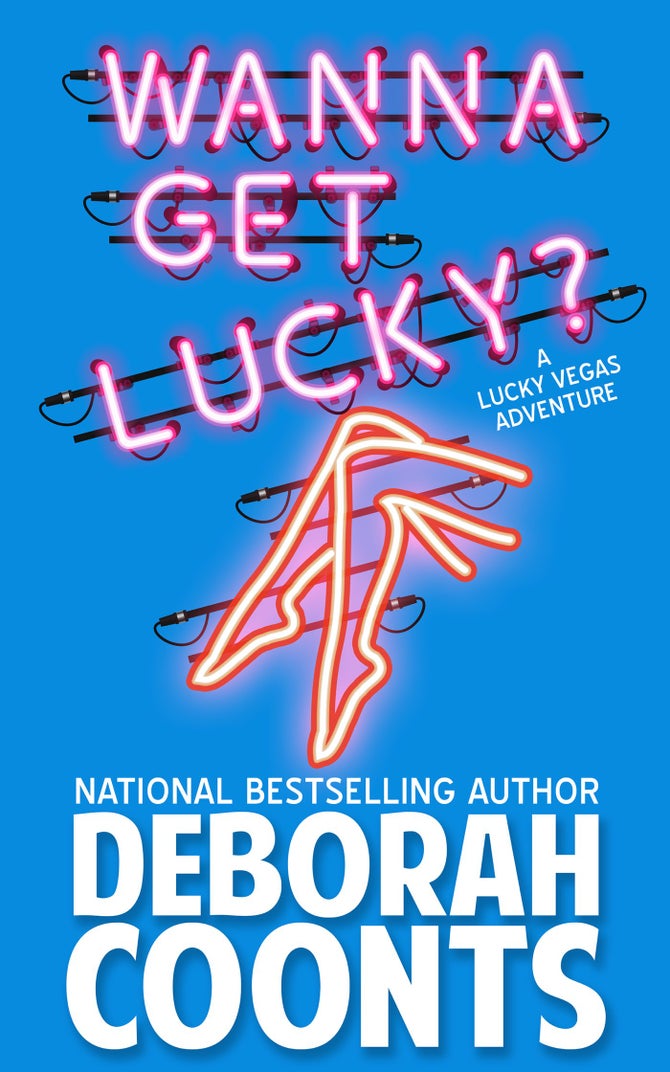 By Deborah Coonts
Part of a Complete Series

Everyone Has a Hidden Talent

For Lucky O’Toole it’s murder…solving it.

Surviving in Sin City takes cunning, a pair of five-inch heels, and a wiseass attitude. Lucky has mastered them all and has a pair of legs she uses to kick butt and turn heads.

As the Chief Problem Solver for the Babylon, Las Vegas’s most over-the-top destination, mischief is in her job description.

She’s good at her job.

She’s less good at life. But who has time for a life when there’s a killer on the loose?

A woman falls from a tour helicopter to the horror of the 8:30 Pirate show crowd.

Was it suicide? An accident? Could she have been pushed?

Lucky’s day began with the invasion of the Adult Video Awards and Trade show convention.

It got more hectic when the spouse-swapping annual event checked in.

And if adding a body to the mix wasn’t enough, Lucky’s got a new suitor. Her best friend, Teddie, a female impersonator who is pressing to take their relationship to the next level.

Can she really date a man who looks better in a dress?

What happened to the woman over the pirate show?

Will her sleuthing skills catch the killer and save her job?

A light, funny, romantic mystery providing a Vegas escape appropriate for anyone looking for a good laugh. Pick up a copy now and start your adventure.


AN INTERVIEW WITH DEBORAH COONTS

Why did you decide to write humor?

I’m not sure I decided to add snark to the Lucky books, specifically to Lucky’s own voice, it just happened that way. When I was a kid, my mouth always got me into trouble. Finally, I’ve found a way to harness the sarcasm for the Forces of Good—or at least in a way not to anger my grandmother. And when Lucky started talking to me, she had a strong dose of sass in her.

The Lucky O'Toole Vegas Adventure series is hard to categorize. Is that by design?

When I set out to write Wanna Get Lucky?, I knew I wanted to write a romp through Las Vegas. I had the characters and the setting but no real understanding of narrative drive. So, I threw a young woman out of a tour helicopter into the middle of the Pirate Show and let the story unfold. A bit of murder to keep the plot moving, some wisecracking and Vegas mischief to make you laugh, and some romance to keep it interesting. A bit of a mash up, but it works.


PRAISE FOR Wanna Get Lucky?

"This is chick lit gone wild and sexy, lightly wrapped in mystery and tied up with a brilliantly flashing neon bow. As the first in a series, Wanna Get Lucky? hits the proverbial jackpot." - Booklist

"Deliciously raunchy, with humorous takes on sexual proclivities, Vegas glitz and love, though Agatha Christie is probably spinning in her grave." - Kirkus Reviews

"Get ready to win big--with a novel that will keep you glued to the pages all the way to the end. Wanna Get Lucky? is as entertaining as the city in which it's set." - Brenda Novak, New York Times & USA Today bestselling author

"More fun than a winning streak in Vegas. Lucky O’Toole is a character with brains, beauty, and a wry sense of humor. Readers will want to meet her again—and soon." - Diane Mott Davidson, New York Times bestselling author

"Paints a dead-on portrait of Las Vegas that is somehow dark, outrageous, and hilarious at the same time. Lucky O’Toole is wise, witty, and brimming with cheery cynicism. Wanna Get Lucky? goes down faster than an ice-cold Bombay martini--very dry, of course, and with a twist." - Douglas Preston, New York Times bestselling author

"Wanna Get Lucky? sizzles. It beguiles and surprises. It's belly-laugh funny. Add in unforgettable characters, crimes to die for, the ka-ching of high-stakes casinos, and Laura Ashley-decorated bordellos, and you have a read that's utterly irresistible from first page to last. Watch out, Janet Evanovich. The new hot number is Deborah Coonts." - Gayle Lynds, New York Times bestselling author

"When it comes to the crunch (something for a sullen teenager, hostile neighbor, unbearably saintly mother-in-law), the secret is to make them laugh. Deborah Coonts's Wanna Get Lucky? (Forge/Tom Doherty, $24.99), set at the 'most over-the-top mega casino/resort on the Las Vegas Strip,' entrusts the sleuthing to a brainy beauty who sees the lighter side of human folly." - Marilyn Stassio, New York Times Book Review, choosing Wanna Get Lucky? As a Notable Crime Novel for 2010
___