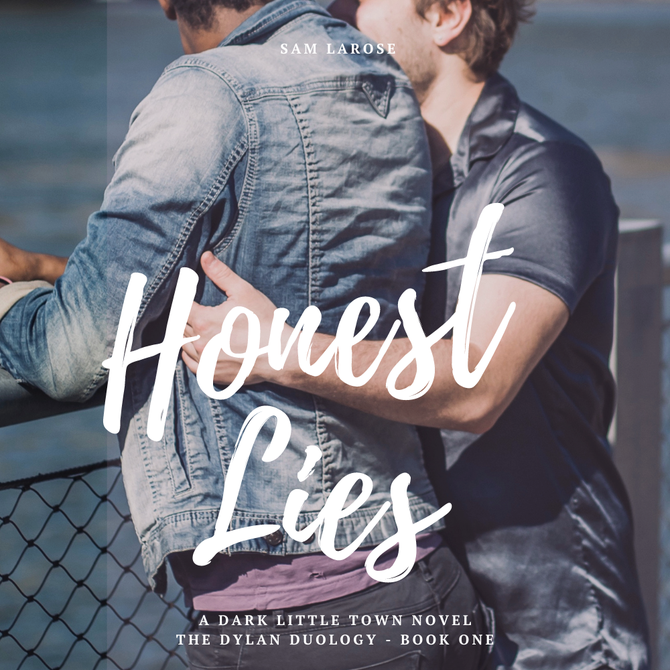 By Ink Stained Fingers Press
Notice: The earliest printings of Honest Lies include a volume number of 4. This error has been fixed for later printing and existed in the metadata fields as it was listed as Dark Little Town, #4. This is Book 1 of the Dylan Duology.
Also Note: This is for a PAPERBACK edition of Honest Lies. Paperbacks purchased from this store are always autographed!

"Have you thought about it though? What you're going to say to Tyler? You haven't seen him in a while."
"Thinking about it makes me feel sick," he admitted. "I'm just here to listen, okay?"
"Okay. I get it. No pressure." She reached across the table to squeeze his hand. "You can't avoid him forever though. He's your best friend's boyfriend's best friend."
"I don't want to avoid him forever. I just want to enjoy my first night back in Manhattan." He raised his coke. "Completely, one hundred percent sober. Twelve hundred, seventy-six days."

Dylan Montgomery is back in Manhattan. After three years in LA, he's anxious to resume life as normal in the greatest city in the world. He doesn't expect seeing Tyler Norse to still make him feel like a lovesick teenager. He knows getting too close to the man will only lead to one or both of them getting hurt again. Their former relationship is better left in the past.

Tyler Norse isn't prepared for Dylan's return after putting a continent between them. He tried to move on, but it didn't stick. Seeing Dylan again brings all the old feelings and lack of closure back to the surface. He respects Dylan's decision to move on, but it doesn't mean he likes it.

Jordan Baxter is happy with his boyfriend. He hasn't wanted more since breaking up with his joyfriend Dani, but lately Kyle has suggested that he look for another partner. After all, Kyle has three other boyfriends who are all vying for his attention; he doesn't want Jordan to feel neglected. So, when Dylan steps back into the band's life, Jordan's curiosity is piqued in a way it hasn't been in a long time.

With Tyler's go ahead, Jordan asks Dylan out on a date. Just to see what happens. Dylan isn't interested in being Jordan's boyfriend, but he isn't averse to making a new friend who likes kissing occasionally. As the summer progresses into fall, Dylan struggles with finding his footing in adulthood, gaining privacy and distance from his privileged upbringing, and maintaining his sobriety.
.