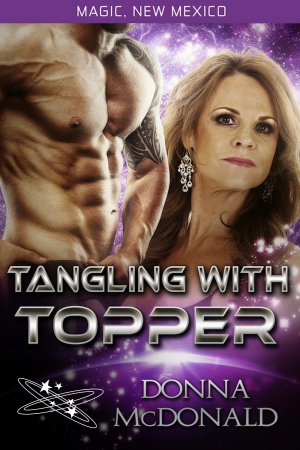 What's a witch to do? She has no power to fight the sexy alien and can’t fight his power over her.

Topper didn’t always like being responsible, but as the head witch in the town of Magic, she has to do the right thing. That means no more chasing adventure fantasies for a while. It means no out of country safaris or whitewater river rafting until Magic's latest witchery fiasco is over.

Nothing on either planet explains why the allegedly mature Glacieran male steps from the portal completely naked. Topper doesn't care how handsome Stark is or how impressive a man package he’s sporting. On top of not caring one whit that he’s embarrassed her and all the witches gathered to help, Stark is the most arrogant being she has ever met. This includes her three mythological Goddess friends--the Fates--who decide to amuse themselves by taking some of her powers away without telling her why. Getting some new friends just went on her to-do list.

When the men in black suits and a nosy scientist arrive in the middle of their crisis, the additional troublemakers cap off the worst week Topper can ever remember having in her entire witchy life. The only bright spot is that Stark--for all his arrogance--turns out to be a sleek, sexy, and talented alien animal in bed. What he makes her feel is real magic and she intends to enjoy it while she can. He's the one male whose memories she won't need to wipe when it’s over because Stark’s leaving anyway.