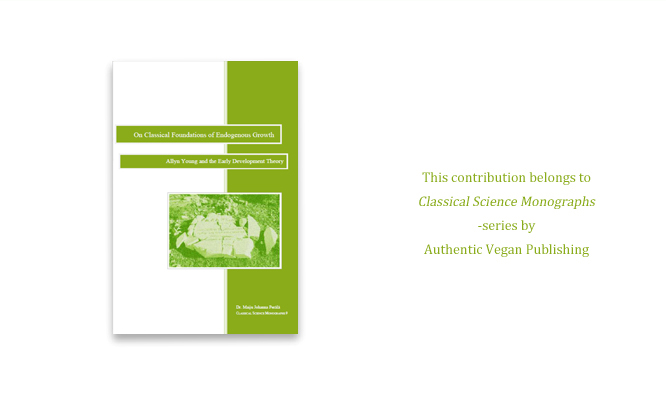 On Classical Foundations of Endogenous Growth: Allyn Young and the Early Development Theory

By Authentic Vegan, Consulting and Publishing
This study discusses the classical foundations of endogenous growth theory by examining the history of thought narrative on Allyn Young to recognise the close relationship that the classical growth theory has with the early development theory. Basically, the analysis shows that Young’s externalities-fuelled cumulative growth process substantially influenced the theoretical thought of early development theory pioneers, Paul Rosenstein-Rodan and Ragnar Nurkse. The conditions that prevent the development of underdeveloped regions, indivisibilities and inelasticities of demands and supplies, represent the breakdown of the conditions that Young highlights as necessary for self-sustaining, endogenous growth to occur. The analysis and discussion in this study make evident that Young’s cumulative growth process underlies the notion of development and growth that the early development theorists envisioned. The critical distinction hinges on the fact that while the focus of the development pioneers centres on the malfunctioning and restarting of the process of growth in order for an economy to attain an advanced economy status, Young envisioned and analysed the potential of dynamic self-sustaining, endogenously generated growth in a more advanced capitalist market economy, making explicit reference to the macroeconomic level phenomenon that the process involves, essentially by considering the most central economic dynamics as being a process of capturing increasing returns. Aligning the visions of the before-mentioned pioneers enables the construction of a unified growth theory framework, known as the classical endogenous development and growth theory, which is endowed with the capacity to analyse the process of development and growth continually from low income to high income economy status.

This high quality scientific investigation is released to the global market as the ninth contribution in the Classical Science Monographs -series, which contains academically valuable contributions by Dr. Maiju Johanna Perälä that bear undeniable relevance for the advancement of the humanity globally.