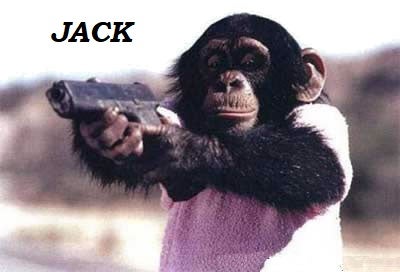 By Elno Lewis
‘JACK’ is sixty some thousand words of hitman driven macabre romantic comedy. It is written by a Port-a-John pumper mistaken as an author by an idiot savant hitman who has suddenly discovered a philosophical vein in his coal mine of a psyche—and he wants the world to know it.

Jack’s very first contract was put up by the Knights of Columbus who send him to whack a Peruvian nun.  Afterward he apprentices for the American government but that goes horribly wrong several times over.  Finally, when no one else can put up with his madness his mentor sends him off for stints with the Mexican drug cartels and the Detroit Mafia.  Jack manages to piss all of them off and subsequently blazes a whole new trail of murderous insanity sprinkled with little dollops of sadistic irony.

During one harrowing adventure Jack falls hard for the first woman he knows he could never kill.  To him, that is what love is all about.  Of course, even new found love is not without problems.  Jack tackles those like a monkey with a loaded pistol, which does actually happen in the first chapter.  The parade of lunacy to follow includes crooked FBI agents, psychotic motorcycle gangs, a vast array or minority gangsters, a severely battle fatigued Viet Nam vet, and honeymoon pranks executed by reckless but well intentioned compadres.  Jack, contains a little something for the whole family!

And, just in case you cannot get enough of monkeys, visit my YouTube site!
Professor Chimp!


The three files are all the same story, just in different formats!