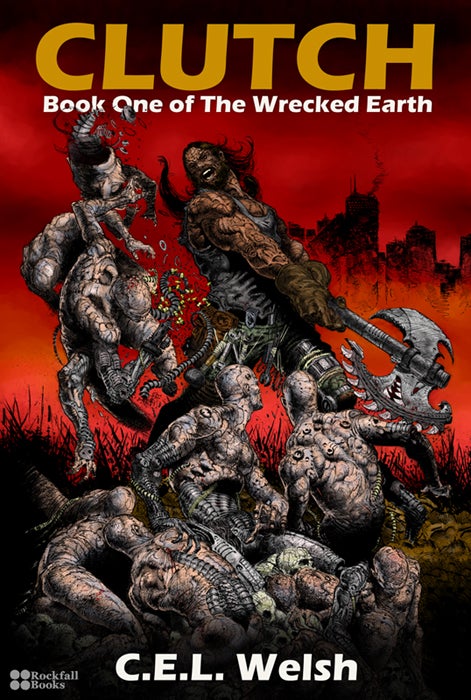 CLUTCH Book One of The Wrecked Earth

“Imagine Conan, raised by a biker gang, in the world of Mad Max.” -Darin DeVore, Between The Bubbles

In 2033 the Earth you know has changed.
Meteors fill the sky and pummel the Earth. Cities have crumbled or vanished in atomic fire. Mankind struggles to rebuild, but can barely survive. The old maps are useless. The old ways are dead. All that matters now is power…

Horsepower
One man rises above the rest: Clutch. The last Tribesman. He rides across the blasted lands searching for the men who killed his people, moving from one island of humanity to another, praying his fuel doesn’t run out before his luck.

Firepower
After years of harrowing travel, Clutch finally has a chance for peace. He thinks he can hide from a world of violence and blood, of gun battles and up-close-and-personal killing. He is wrong.

Willpower
Fate conspires against him, using herds of mutated animals, wicked surgical experiments and their master – a strange being with the power to control the minds of men. When the only person he cares about is threatened and the people who depend on him stand in his way, Clutch must decide:

Does he stand for humanity, or himself?