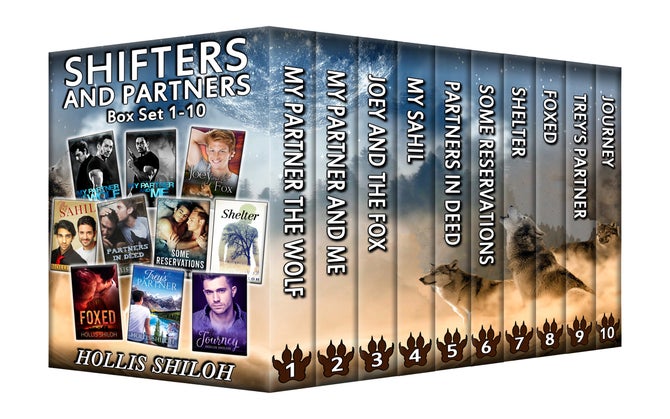 My Partner the Wolf

Chemistry off the charts—but is that enough?

Tom Langley and Sean Goods work together in a human-and-wolf shifter partnership, assisting the police, rushing in to solve crimes wherever their bosses send them. They're a great team, and they have fun together, too: joking and enjoying each other's company in a way that doesn't happen every day.

Tom is also a married man. And his husband hates the wolf shifter with a passion. Tom tries to balance the sides of his life—one minute on a high-pressure chase with Sean, the next placating his husband Lowell.

Then the unthinkable happens: his marriage ends. Heartbroken, he's not expecting to ever get over Lowell's betrayal or to be able to love again.

Sean offers a solution: sex as friends. They have chemistry, and they trust each other.

But can they change their partnership that much? And is Sean secretly harboring feelings for him—expecting more than just sex?

Sean is a loveable, funny, strong, and protective. He's the best buddy a guy could have. But Tom might not be able to keep from breaking his heart—if Sean is in love with him, and Tom can't love him back.

My Partner and Me

Being mates makes everything perfect—doesn't it?

Sean is happy with his mate, Tom. As far as he's concerned, life is golden. Except for when it isn't. Their work is dangerous. While Sean's recovering from his most recent injury, he hears a little girl in his head, calling for help. And his wolf side is acting up: too sensitive, too vulnerable. He needs Tom more than ever, especially when it means facing his family and old wounds. Even if things are never truly right for his wolf side, at least he has a mate who will never leave him…right?

Joey and the Fox

Asshole cop. It's Joey's role, and one he's comfortable with. Joey tells gay jokes. He's crude, tough, and thick-skinned. But now he's got a chance to work with a fox shifter—and he doesn't want to lose that opportunity.

Dylan is a mess: clingy and broken, cheerful but lost, seriously unpredictable…and very gay. But Joey desperately wants the partnership to succeed. He's not willing to lose the fox shifter for any reason, even when Dyl drives him crazy.

Is there any way to make it work? And will the weird attraction he feels to the cute redhead ever go away?

Grant Ralstead has loved Sahil Singh for years, working with him and being his friend but knowing all the time that the angry, fierce human is his mate.

Singh doesn't believe in mates or love, and doesn't trust anyone. But he worries every time Grant has to go away on a mission, endangering himself. Even though he pushes Ralstead away, his feelings about the wolf shifter are clearly complicated.

Is there any hope for a happily-ever-after between a wounded human and the wolf shifter who loves him?

A Ralstead and Singh short novella. Fits in the Shifters and Partners universe.
Relationship-centered, very low heat, some angst.

The entire series so far in one box set.