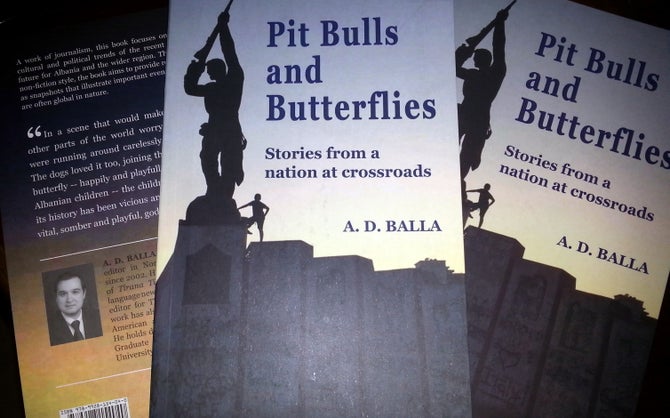 Pit Bulls and Butterflies: Stories from a nation at crossroads (eBook Edition)

A work of journalism, this is a must-read book for anyone interested in understanding Albania and Albanians in the global context. It sheds light on some major economic, demographic, cultural and political trends for Albania, the wider region and the Albanian Diaspora.

This is an electronic version of the hard copy book published in April 2015. It comes in .pdf, .mobi and .epub formats, which can be read by an array of e-readers (Kindle, iBooks, etc.)

It includes the following chapters:

2/Pit Bulls and Butterflies
Albania celebrates 100 years of independence, reflecting on its past and future opportunities.

4/A People at War
The Kosovo War leads to the creation of Europe’s newest country, but concerns over the economy and stability remain.

5/Sons in America
How the large Albanian Diaspora in North America has influenced the land of its roots.

6/The Shrinking Nation
Albania is headed for a demographic crisis as emigration persists and birth rates plummet.

7/Turkish Soaps
Why Turkey’s soft power is growing in Albania and the region, and what it could mean for the future.

9/In the Footsteps of Sul Pasha
How massive internal migration transformed Tirana, Albania's once sleepy capital.

10/The Business of Education
Greed and lack of standards in higher education have dealt a blow to the future of many young Albanians.

11/There Goes the Neighbourhood
Why the Eurozone crisis – in Greece and Italy in particular – has hit Albania hard.

12/Better Off at Home?
Some Albanian migrants return home to escape hardship in host countries. But will they stay?

13/Painting the Country
A generational shift in Albania's leadership.

14/Greener Pasture
The story of Lazarat, a former marijuana growing haven worth billions before Albanian authorities ended the party.

15/All Roads Lead to Brussels
A critical look at Albania’s hopes of joining the European Union.

16/The Better Angels
Why Albania’s religious harmony and ultra-liberal approach to matters of faith is no accident.

17/Present Meets the Future
An attempt to predict the likely long-term outcome of current trends in Albania.

Prefer a hard copy book instead? It's available in Albania wherever international books are sold and for online purchase and global distribution from Shtepia e Librit here: goo.gl/EL8EZQ.