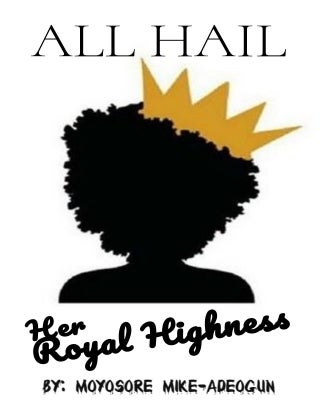 ALL HAIL HER ROYAL HIGHNESS

By Moyo Mike-Adeogun
“Where do you think you’re going miss?” He said.
“Home. Now let go of me”, Genesis replied getting agitated.
“I don’t think so”, he said with a repulsive smile.
“Let me-“ she was cut off by a deep voice.
“I think she said to let go”, the voice called out.
A dark skinned man stepped into the dim glow of the street light. She gasped.
“He’s one handsome man”, she thought.
He was dressed very casually and walked with a confident bounce in his step.
A cigarette was sitting on his lip when he stepped forward but he removed it and put it out after taking one last drag.
The attacker scowled and said “Who are you?”
The handsome man smirked and said, “I am Prince.”

She was broken
He needed saving

But she was fearless
And he was dangerous

What could become of hardheaded Genesis when she falls into the hands of the infamous Prince?