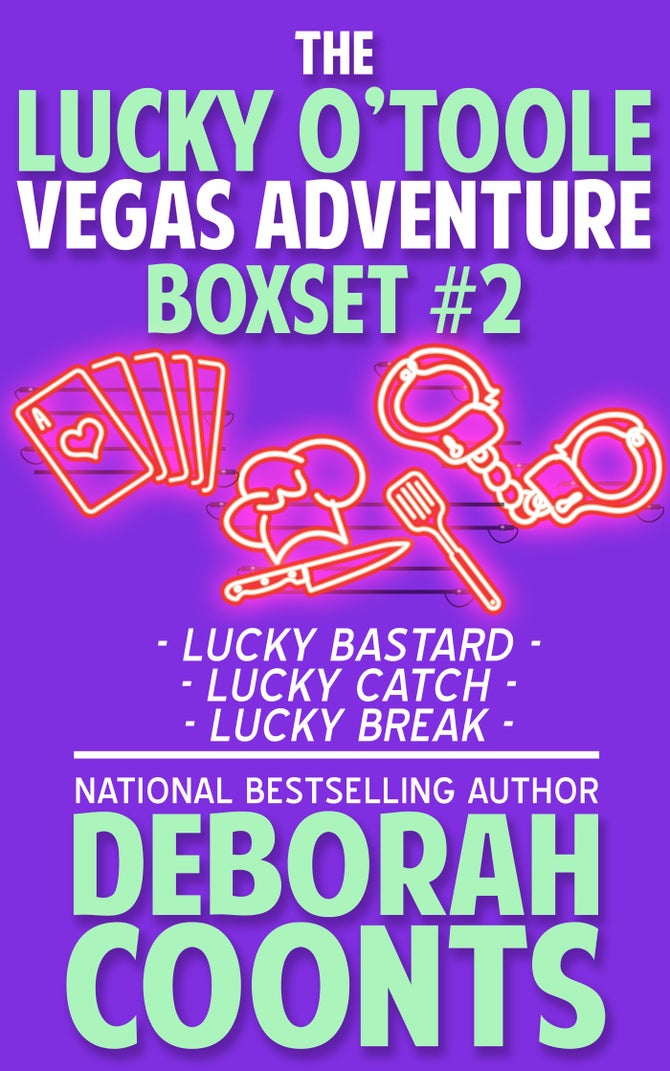 This boxset includes the fourth, fifth and sixth novels in the bestselling Lucky O’Toole Vegas Adventure series. With over 1,000 pages and 300+ five star reviews, you don’t want to miss this bundle of Vegas highjinks, murder, romance, and laugh-out-loud moments we all can relate to.

Death by Jimmy Choo? Who knew?

Lucky O’Toole, the newly promoted Vice President of Customer Relations for the Babylon, Las Vegas’ primo Strip property, has never met a problem she couldn’t handle. But, when a young woman is found dead, sprawled across the hood of a new, bright red Ferrari California in the Babylon’s dealership, a Jimmy Choo stiletto stuck in her carotid, Lucky’s skills are maxed out. Of course her life is already on overload. A song that Teddie, Lucky’s former lover, wrote for her is getting national airplay as he hits the talk shows, pleading for her forgiveness. She’s having enough trouble fending off Chef Jean-Charles Bouclet, the Babylon’s tasty new dish.

All of this and The Smack-Down Poker Tournament, the second-largest poker tournament in the world, is holding its final table at the Babylon.  Hookers, thieves, players, cheaters, media, and hangers-on all descend looking to win or to score. When one of the players turns up dead, Lucky starts to make connections, putting her in the crosshairs of the killer.

After a revelation by someone close to her sends her world reeling even further, Lucky struggles to keep her life in balance, and a murderer from killing again as bodies pile up.

Then, just when she’s losing control…life deals another major complication to her personal life…but can she handle it?

Trouble always comes in threes. At least that’s what Lucky O’Toole, the VP of Customer Relations for Las Vegas’ primo Strip casino/hotel, the Babylon, has heard. So, tonight, when Teddie, her former lover shows up at her office unannounced and unexpected, a cadre of celebrity chefs with the maturity of teenagers arrives at the Babylon for a televised cook-off, and Lucky’s current lover, Jean-Charles Bouclet stops answering his phone leaving Lucky to handle his five-year-old son, Lucky figures she has tonight’s complement of chaos covered.

As usual, she is a tad optimistic.

When a prized Alba truffle is stolen from the walk-in in Jean-Charles’ restaurant and a young chef apparently killed with a smoking gun is found in Jean-Charles’ food truck on the back lot, trouble takes a sinister turn.

And when Lucky’s path crosses the killer’s…will her goose be cooked?

With Christmas a few days away, Lucky O’Toole, Vice President of Customer Relations for the Babylon, Las Vegas’s premier Strip casino resort, is in a festive mood. The upcoming wedding of her assistant to the Beautiful Jeremy Whitlock and her own engagement to her delish French Chef, Jean-Charles Bouclet have Lucky in full holiday cheer.

And even bigger celebrations are afoot. The national media is focused on the grand opening of Jean-Charles’s restaurant atop Lucky’s very own slice-of-heaven hotel. The opening gets a boost when Holt Box, a retired country-western singing legend lends a hand in the kitchen, adding mega-watt celebrity buzz.

The only sour note is her former lover, Teddie.

Teddie claims Lucky’s father, the Big Boss, has put an end to his return to the Las Vegas stage by handing that stage to Holt Box. Box is returning from retirement, a comeback of epic magnitude that will give the Babylon—and Lucky's career—an incredible boost.

Taken by surprise, Lucky takes the high road. Or rather, she does what she always does when life overwhelms…she ignores it.

Until she finds Teddie and her father, bloodied and angry, standing over the lifeless body of Holt Box, a dagger in Teddie’s fist.

The media sharks are circling. A Macau heavy-hitter in town, flying under the radar but making his presence felt. An old nemesis of Lucky’s is out of prison and salivating for revenge.

Time is short as Lucky must discover whether Teddie is a killer.