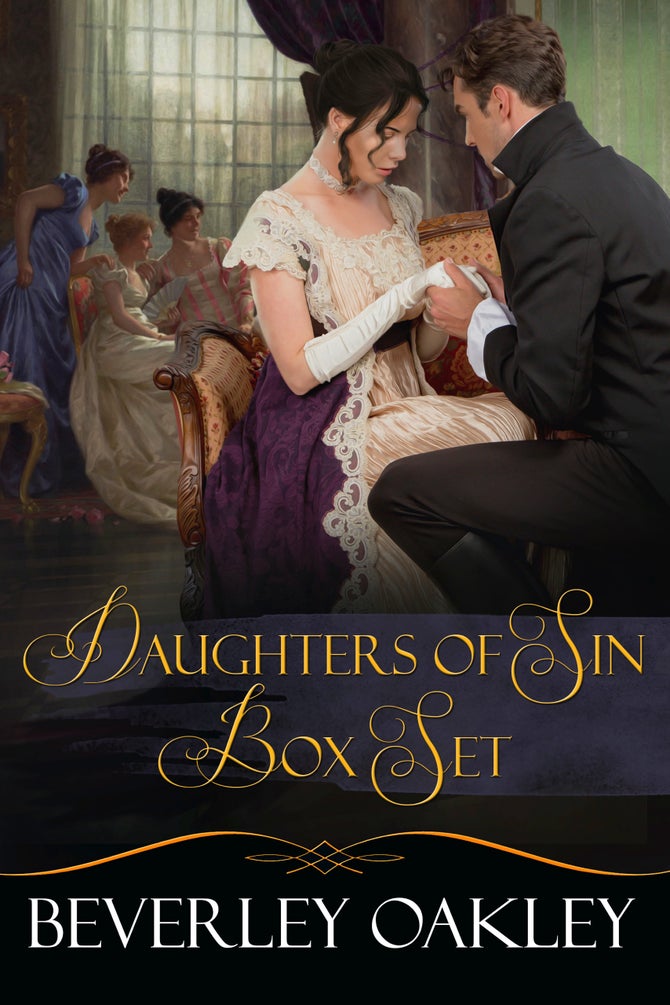 By Beverley Oakley Historical Romance
Two nobly-born debutantes and their illegitimate half sisters compete for love while trying to bring to justice a handsome, dangerous villain during a hectic Regency London season.

Caught up in a high-stakes game of intrigue and deceit orchestrated by the eldest sister - vain and ambitious Lady Araminta Partington, the ton's reigning beauty - each sister must play her part to bring a dangerous traitor to justice while finding a man deserving of her love and special talents.

Her Gilded Prison ~ She was determined to secure the succession, he was in it for the pleasure. Falling in love was not part of the arrangement.

When dashing twenty-five-year-old Stephen Cranbourne arrives at the estate he will one day inherit, it’s expected he will make a match with his beautiful second cousin, Araminta-not fall in love with her lonely, neglected mother.

Dangerous Gentlemen ~ Shy, self-effacing Lady Henrietta was the wallflower beneath his notice…until a terrible mistake has one dangerous, delicious rake believing she's the "fair Cyprian" ordered for his pleasure.

But when the innocent debutante is mistaken for her common namesake "Hetty" and embroiled in the Regency underworld, she finds herself shockingly compromised by the dashing, dangerous Sir Aubrey, the very gentleman her heart desires. And the man Araminta has in her cold, calculating sights.

The Mysterious Governess ~ Lissa Hazlett lives life in the shadows. The beautiful, illegitimate daughter of Viscount Partington earns her living as an overworked governess while her vain and spoiled half sister, Araminta, enjoys London’s social whirl as its most feted debutante.

When Lissa’s rare talent as a portraitist brings her unexpectedly into the bosom of society, she’s embroiled in a scandal involving Araminta and suspected English traitor Lord Debenham. But with an unlikely ally - charming and besotted Ralph Tunley who is also Lord Debenham’s underpaid, enterprising secretary - Lissa cleverly navigates a perilous web of lies to ensure everyone gets what they deserve.

Beyond Rubies ~ Fame. Fortune. And finally a marriage proposal!

Kitty La Bijou, celebrated London actress, mistress to handsome Lord Nash and the unacknowledged illegitimate daughter of Viscount Partington has escaped her humble beginnings and found fame, fortune and love. But the respectability she craves eludes her. When she stumbles across Araminta, her nobly-born half-sister, on the verge of giving birth just seven months after marrying dangerous Viscount Debenham, Kitty realises respectability is no guarantee of character or happiness.

But helping Araminta has unwittingly embroiled Kitty in a scandalous deception involving a ruthless brothel madam, a priceless ruby necklace and the future heir to a dazzling fortune.

Choosing honor over desire, Kitty joins forces with her sister, Lissa, to bring to justice suspected traitor, Lord Debenham. Exposing the dark secret of one of the sisters is the only way for to achieve justice for all.

If you like intrigue, passion and exciting plot twists, you’ll love Daughters of Sin, a thrilling Regency-set family saga. Get the complete box set now – and save!