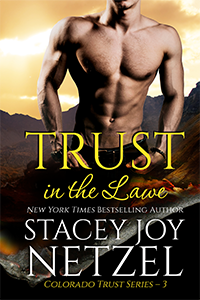 Kendra Zelner has three brothers: Eight-year old Noah she's determined to protect, Joel has no clue she exists, and Robert wants her dead.

She takes Noah and flees their Manhattan home for Joel’s ranch in Colorado. Under the pretense of needing a job, she plans to hide out until her twenty-fifth birthday, when she’ll inherit her trust fund and legally gain custody of Noah away from Robert’s greedy hands. Unfortunately, her new-found brother’s sexy, infuriating ranch manager insists on demolishing her defenses and digging into her past.

Colton Lawe has good reason to suspect Joel’s beautiful, long-lost sister isn’t what she seems—the little liar stole from him! He silently vows to expose her secrets, but long hours together on the ranch fosters a friendship and attraction neither of them expects. Can Kendra trust Colton with the full truth before Robert tracks them down?

“Trust in the Lawe [is] suspensful and filled with characters that you will fall in love with. I have a great respect for Stacey Joy Netzel and the way she can write a romantic story with sizzle and spice that kept me absolutely addicted.” ~ Val Pearson, You Gotta Read Reviews, 5Stars