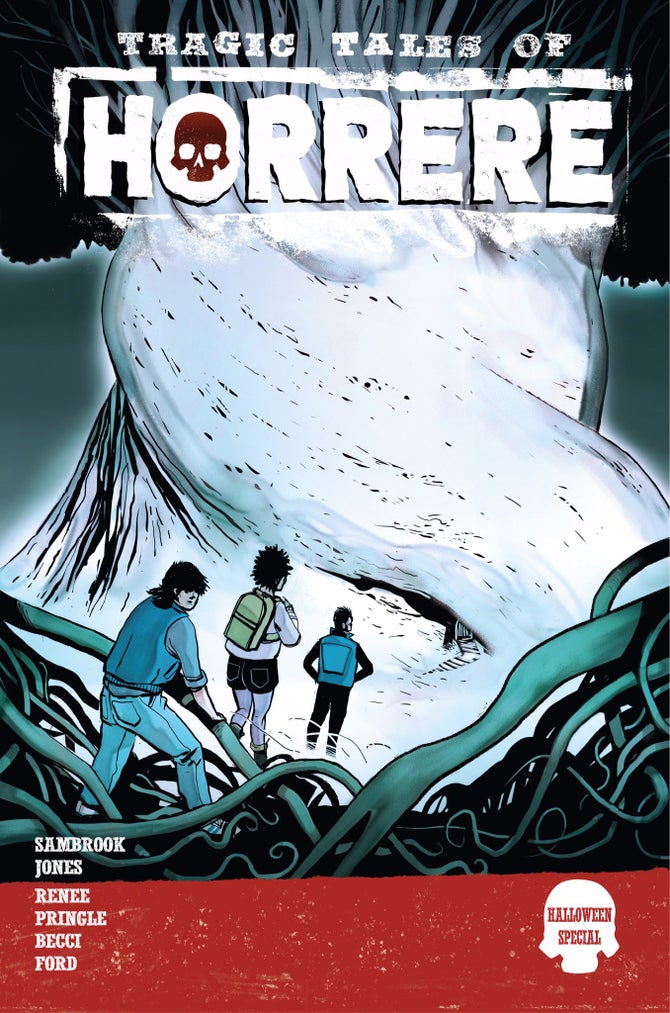 The air turns cold around you, leaving your sharply exhaled breath hanging in the air like a tangible echo of fright. The hairs on your arm stand to attention like soldiers readying for a battle against an unknown presence. A strange tingle runs down your spine, an electric jolt from your primitive mind, a defense mechanism from a time before language. Your body is readying itself for an invasion of horror from beyond.

All of this can mean only one thing...

Lock your doors, warn your children, and hold on tight because the UK’s greatest Horror anthology is back with three brand new stories in an extra creepy HALLOWEEN SPECIAL!

This brand new issue features two new stories written by Horrere stalwarts Michael Sambrook and Rob Jones and one incredible guest story written and illustrated by newcomer Mat Pringle, and if you’re brave enough, here’s a little preview of what you can expect within:

The first featured story is from the debuting Mat Pringle, entitled OCTOPUS & RAVEN. An exploration of life, death and rebirth told through stunning visuals that are guaranteed to haunt you long after you finish reading. Hold your breath! The water is deep! The cycle continues.

Secondly, there’s the return of Horrere favourite, the Professor! Since surviving his close brush with The Aufhocker in issue one, something new has caught the Professor’s professional and personal curiosity and lead him to the house of an old friend. A trinket has caused his friend some considerable alarm and the Professor’s cryptographic and linguistic talents have been requested to try and get to the bottom of the mystery…BEFORE THE MOON RISES FULL! From writers Michael Sambrook and Rob Jones and featuring art from the Horrere debuting Joe Becci comes a darkly comic tale of dusty victorian manors and even dustier artifacts. THE QUIESCENT!

Then finally, rounding out the issue, comes a chilling tale of finding things that should remain hidden, seeing things that should remain unseen and opening doors that are best left firmly closed. A group of children find a strange note calling them to the woods, a couple of 19th Century bandits find a mysterious monolith, and the ancient presence uniting these events will drag you headfirst into a story that bends time, space and your expectations! You will be left shuddering with fright. Written by Michael Sambrook and Rob Jones and featuring art from the incredible Alexa Renée comes DO YOU WANT TO SEE?

So, clear your schedules, light your pumpkins and get comfortable because the HORRERE HALLOWEEN SPECIAL will provide you with all the entertainment you could ever possibly need.

Physical issues for issue 1 and 2 can also be purchased from here: www.woody.bigcartel.com