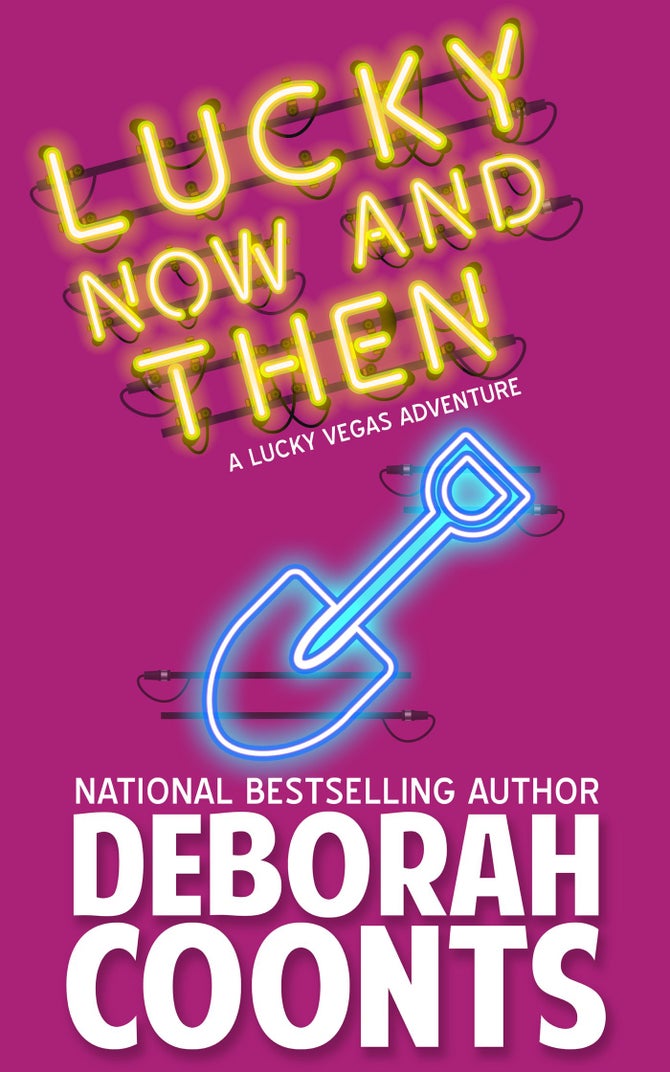 Lucky Now and Then

Everyone Has a Hidden Talent

For Lucky O’Toole it’s murder…solving it.

Surviving in Sin City takes cunning, a pair of five-inch heels, and a wiseass attitude. Lucky has mastered them all and has a pair of legs she uses to kick butt and turn heads.

As the Chief Problem Solver for the Babylon, Las Vegas’s most over-the-top destination, mischief is in her job description.

She’s good at her job.

She’s less good at life. But who has time for a life when there’s a killer on the loose?

LUCKY NOW AND THEN

Las Vegas, the City of Reinvention.

No one knows this better than Lucky O'Toole, VP of Customer Relations at the Babylon, Vegas's newest, most over-the-top Strip property. As the daughter of one of the men responsible for shaping Vegas from its ignominious Mob beginnings to its full current glory, Lucky has witnessed the constant rebirth. So, when the time comes to implode her father's first hotel, The Lucky Aces, she feels the angst, but moves on.

Until skeletal remains are found in the foundation and her father is implicated in a murder.

Then it is a race to uncover the long-buried past. A past no one wants revealed, least of all the killer, who has tried to kill Lucky once before. Lucky must unravel the twisted knot of lies, Mob hits, Vegas power plays, passions, and corruption.

Her father's life hangs in the balance.

And when Lucky discovers a key to the puzzle is locked in her own memory, she becomes a target herself.

A light, funny, romantic mystery providing a Vegas escape appropriate for anyone looking for a good laugh.


AN INTERVIEW WITH DEBORAH COONTS

Why did you decide to write humor?

I’m not sure I decided to add snark to the Lucky books, specifically to Lucky’s own voice, it just happened that way. When I was a kid, my mouth always got me into trouble. Finally, I’ve found a way to harness the sarcasm for the Forces of Good—or at least in a way not to anger my grandmother. And when Lucky started talking to me, she had a strong dose of sass in her.

The Lucky O'Toole Vegas Adventure series is hard to categorize. Is that by design?

When I set out to write Wanna Get Lucky?, I knew I wanted to write a romp through Las Vegas. I had the characters and the setting but no real understanding of narrative drive. So, I threw a young woman out of a tour helicopter into the middle of the Pirate Show and let the story unfold. A bit of murder to keep the plot moving, some wisecracking and Vegas mischief to make you laugh, and some romance to keep it interesting. A bit of a mash up, but it works.

“Get ready to win big--with a novel that will keep you glued to the pages all the way to the end.” - Brenda Novak, New York Times & USA Today bestselling author

"More fun than a winning streak in Vegas. Lucky O’Toole is a character with brains, beauty, and a wry sense of humor. Readers will want to meet her again—and soon." - Diane Mott Davidson, New York Times bestselling author

"Deborah Coonts...entrusts the sleuthing to a brainy beauty who sees the lighter side of human folly." - New York Times Book Review

"Las Vegas is the perfect setting for this witty tale of misdirection and larger-than-life characters. Fans of J. A. Konrath's Jack Daniels series will love this." - Library Journal, starred review

“A whirlwind of a kooky crime novel, and readers will enjoy every minute of it. Coonts provides the perfect solution for readers waiting for the next Stephanie Plum book.” - Booklist
___