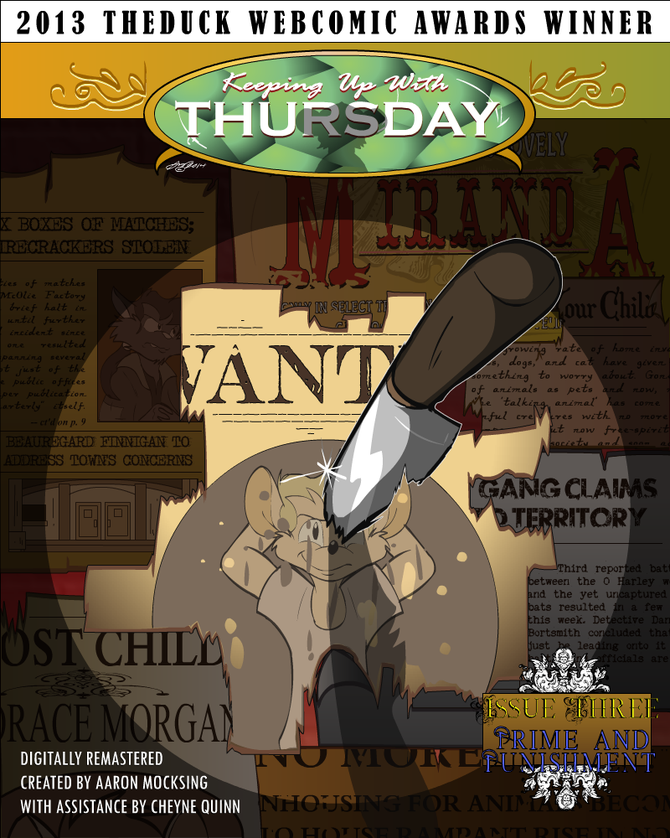 Keeping Up With Thursday - Issue 3 Redux

In the summer of 2013 it was decided that the first three issues of 'Keeping Up with Thursday' would get an overhaul. Most of the 2010-styled pages made back when the author's PC and tools were more or less on their last dying breath have been literally revamped, or at least redrawn to an extent, for clarity and continuity issues that have sprang up over the years. It took a considerable amount of time, but Issue 3 REDUX is a fully completed circle - and a wild beast to say the least - as it has been completely drawn from the ground up. Cheyne's role in making sure the powerful scenes that made this one of the strongest issues in the now ten (going on eleven, and more) issue cycle have remained in-tact, help make this issue ten times better than it was since it's original debut. We hope you greatly enjoy this wonderful inclusion in your bookshelf as it really showcases how unique and different KUWT is from it's inspirations, whie staying true to what made such 80's and 90's animation cult classics in our memory so good and involving.

When Patrick had his first slip-up in his criminals ways, he was put along fellow criminals and no-gooders and sent right away to work to suffer the consequences. LeBrand and Milon, two gambling circus hooligans who bring the party to your house quite literally; Funday, a fun-loving youth caught up in the bad ways of Svenn, the rat, who's out to make a 'statement' to the rest of the world how much he hates society. With two weasels watching them and a paranoid leader to boot, will it do them much good to escape? Or is this one hard life lesson that'll shape up our pals here for the benefit of the long arm of the law? Check it out in this exciting third issue of KUWT!