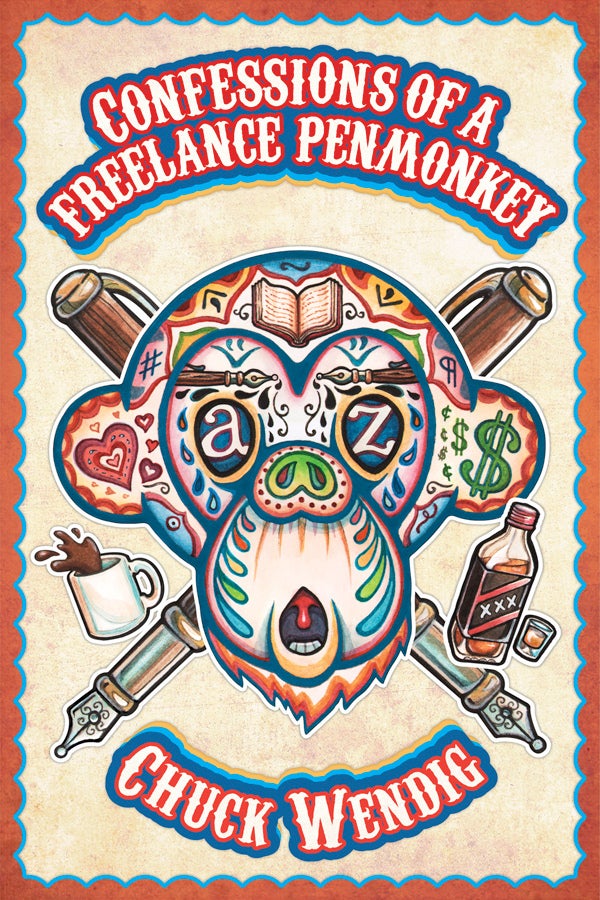 Confessions of a Freelance Penmonkey

[note: this is a PDF file only]

“If it weren't for Chuck Wendig's advice, I'd have fallen off the writing map long ago.” -- Karina Cooper, Author of Blood of the Wicked??“In terms of style, Wendig reminds me most of Stephen King. There's a way of using somewhat fevered, rugose prose to describe both the beauty and horror of the mundane, then switching to a plainer mode when describing the outer limits stuff, that brings to mind King's 80s and 90s work." – io9.com

“You walk into this book a quivering neophyte crusted with writer fantasies and walk away a seasoned word warrior ready to do battle in the arena we call publishing.” – Kristen Lamb, author of ARE YOU THERE BLOG? IT’S ME, WRITER

Want to become a novelist? A screenwriter? An all-around freelance penmonkey? Don’t know the difference between beats, scenes, sequences and acts? Not sure where to begin your edit, or how to query an agent, or what liquor goes best with the madness of being a writer? Then CONFESSIONS OF A FREELANCE PENMONKEY is all yours.

CONFESSIONS is a collection of 50+ essays on the subject of writing and the writing life. It covers a wide array of subjects, from technical advice to discussions of publishing versus self-publishing to what to do if you wake up pantsless and ink-stained in the basement of a Tijuana bookstore.

Equal parts hilarious, insane, profane, and profound, CONFESSIONS will take you through the trials and tribulations of the penmonkey’s existence, offering advice every step of the way.

…“Drop That Pen, Grab A Hammer: Building The Writer’s Platform”

…”Exposing Yourself: Do You Write For Free?”

…“No, Seriously, I’m Not F**king Around, You Really Don’t Want To Be A Writer”

… “Why Your Novel Won’t Get Published”

…“Why You Won’t Finish That Novel”

(TERRIBLEMINDS has been named one of the top 101 websites for writers by WRITER’S DIGEST magazine!)

Chuck Wendig is the author of Blackbirds, Mockingbird, The Cormorant, The Blue Blazes, Under the Empyrean Sky, Bait Dog, Double Dead, Unclean Spirits, and the Dinocalypse books. He has written over two million words for the game industry and was developer overseeing the Hunter: The Vigil game line for White Wolf Game Studios. He served as co-writer on Collapsus, a digital media narrative that was nominated for an international digital Emmy and a Games For Change award. He co-wrote the short film Pandemic, which showed at Sundance 2011 alongside a six-day transmedia experience based on the story. You can find him blogging at terribleminds.com, or on Twitter (@ChuckWendig), or wandering the wilds of Pennsyltucky with a bloody deer antler in his teeth and a loincloth made from the flesh of his critics.