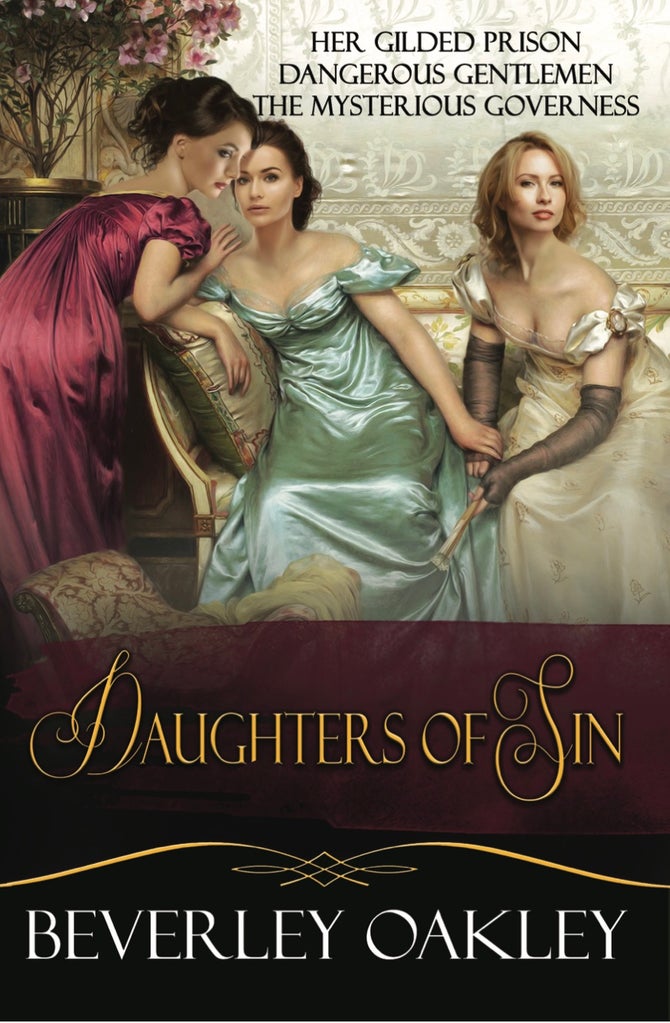 Daughters of Sin: Her Gilded Prison, Dangerous Gentlemen, Beyond Rubies

By Beverley Oakley Historical Romance
Two nobly born debutantes and their illegitimate sisters - a governess and an actress - compete for love while bringing to justice a handsome, dangerous traitor in these passionate, intrigue-filled Regency romances.


HER GILDED PRISON ~ She was determined to secure the succession, he was in it for the pleasure. Falling in love was not part of the arrangement.

When dashing twenty-five-year-old Stephen Cranbourne arrives at the estate he will one day inherit, it's expected he will make a match with his beautiful second cousin, Araminta.

But while proud, fiery Araminta and her shy, plain sister, Hetty, parade their very different charms before him, it's their mother, Sybil, a lonely and discarded wife, who evokes first his sympathy and then stokes his lustful fires.

As Stephen introduces Sybil to every pleasure she's been deprived of, duty turns to a deep and mutual love. But with the unexpected arrival of a contender to the estate, Sybil realises that what she's set in motion to save the family might have tragic consequences.

DANGEROUS GENTLEMEN ~ Shy, plain Hetty was the wallflower beneath his notice…until a terrible mistake has one dangerous, delicious rake believing she's the "fair Cyprian" ordered for his pleasure.

Shy, self-effacing Henrietta knows her place—in her dazzling older sister's shadow. She's a little brown peahen to Araminta's bird of paradise. But when Hetty mistakenly becomes embroiled in the Regency underworld, the innocent debutante finds herself shockingly compromised by the dashing, dangerous Sir Aubrey, the very gentleman her heart desires. And the man Araminta has in her cold, calculating sights.

Branded an enemy of the Crown, bitter over the loss of his wife, Sir Aubrey wants only to lose himself in the warm, willing body of the young "prostitute" Hetty. As he tutors her in the art of lovemaking, Aubrey is pleased to find Hetty not only an ardent student, but a bright, witty and charming companion.

Despite a spoiled Araminta plotting for a marriage offer and a powerful political enemy damaging his reputation, Aubrey may suffer the greatest betrayal at the hands of the little "concubine" who's managed to breach the stony exterior of his heart.

THE MYSTERIOUS GOVERNESS ~ Lissa Hazlett lives life in the shadows. The beautiful, illegitimate daughter of Viscount Partington earns her living as an overworked governess while her vain and spoiled half-sister, Araminta, enjoys London's social whirl as its most feted debutante.

When Lissa's rare talent as a portraitist brings her unexpectedly into the bosom of society – and into the midst of a scandal involving Araminta and suspected English traitor Lord Debenham – she finds an unlikely ally: charming and besotted Ralph Tunley, Lord Debenham's underpaid, enterprising secretary. Ralph can't afford to leave the employ of the villainous viscount much less keep a wife but he can help Lissa cleverly navigate a perilous web of lies that will ensure everyone gets what they deserve.

What readers are saying about the series:

"These books are the best written time pieces I've ever read."

“Lies, misdeeds, treachery, and romance. What an impressive story!”

"This book has it all: secrets, intrigue, murder and romance. I finished it in one sitting."