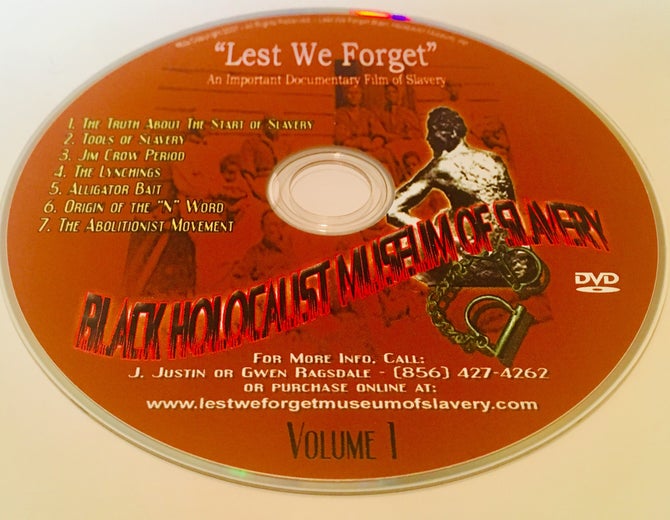 LEST WE FORGET DOCUMENTARY FILM

By LEST WE FORGET MUSEUM OF SLAVERY 5501 GERMANTOWN AVE. PHILADELPHIA, PA 19144
A riveting 45 minute documentary film featuring J. Justin & Gwen Ragsdale, a husband and wife team, founders of Lest We Forget Museum of Slavery in Philadelphia, PA. Together they describe their extensive collection of authentic slave artifacts from the transatlantic slave trade. This (7) chapter documentary covers avery aspect of slavery from "Capture to Emancipation and Beyond". Mr. Ragsdale who has been collecting and authenticating rare objects of enslavement for decades narrates the raw truth of how slavery began and demonstrates how their vast collection iron shackles, manacles, chains and branding irons were used to restrain millions of captive Africans. Mrs. Ragsdale describes how numerous Jim Crow objects were purposely created to depict African Americans negatively that fanned the flames of bigotry and stoked racism. She also reviews the Underground Railroad where freed and enslaved Blacks along with compassionate whites worked together to abolish slavery.

This candid film sheds light on a dark and tragic period of American history (not Black History) it reveals how different coming to America was for millions of enslaved Africans who were held in bondage and forced to provide free labor for decades. It's important to remember the "Legacy of Slavery, Lest We Forget". It also includes a (10) Minute Hip-Hop Music Video which reflects the documentary that young people really get into.