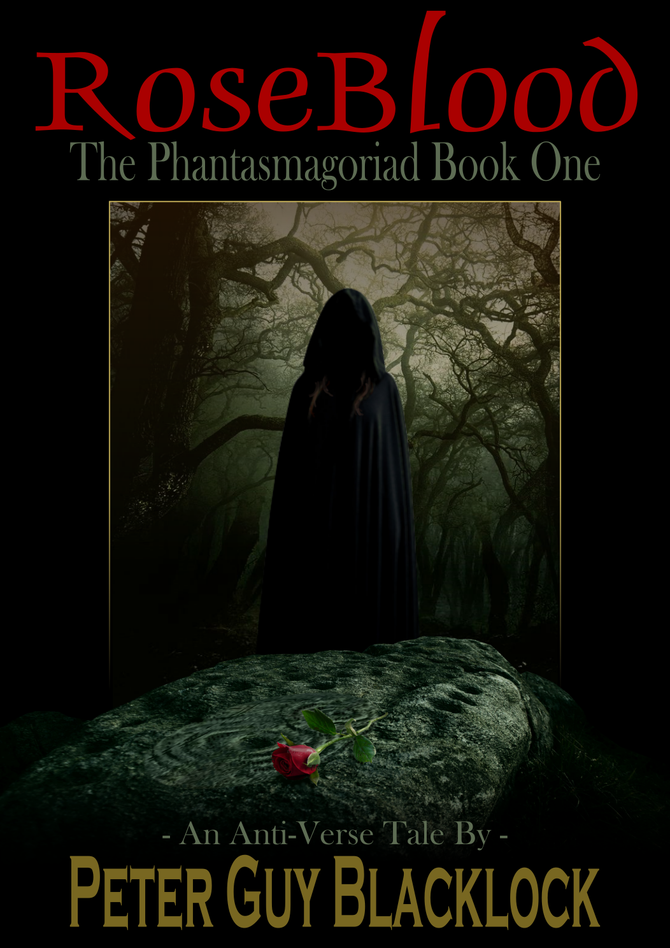 Peter Guy Blacklock’s Rose Blood is the first book in a trilogy of breakneck, erotically charged, Gothic fairytales set in an alternate world full of gruesome horrors, dark fantasies, twisted trysts and hard-boiled heroics; peopled with unique characters, many of whom subvert genre norms, and steeped in authentic occult lore. The gripping story, which hooks from the start, unfolds in and around the eldritch environs of an archaic primeval forest that lingers across a huge swathe of the Britannik Isles – a dark parallel of Britain in the early 1700s.

A chance accident on the road home from finishing-school thrusts a sheltered Rebekah into a violent, desperate and rapidly escalating struggle involving disturbingly prescient dreams, sensual vampiric bloodletting, the brutal kidnap of her sister, the wanton murder-by-troll of her father and the wicked sorceries of an arcane Machiavellian evil from the distant land of Kanaan. With the unlikely aid of a rogue vampire named Mikael, his ghostly lover, Lilith, an old wizard traveller - and agent of the state - called Arkturon and an occult specialist Ranger, the dark-elf Corporal Villovürt; she must set out to rescue Luwsiy, her young sister, from the diabolical machinations of an ancient and powerful sorcerer named Bäliyl Samiyl and his three deadly daughters, Aggareth, Maqlath and Igymeth.

The wizard-led band of assorted and unlikely heroes travel a wayward path that traverses strange otherworldly realms – while a troop of hardened Rangers, led by the stalwart Sergeant D’Geai Rinawn from the deserts of Namib, pursue the same goal on more temporal ground through the ancient, goblin and troll infested Old Forest beset with magical traps and dangers. The two groups follow their respective paths, one beaten by wizardry and wisdom, the other by sword, blunderbuss and brawn.

As well as being part of a trilogy, this novel is the first in a whole series of tales set within the same alternate world that parallels our own. These Anti-Verse Tales will take place in different times and technological periods past, present and future, but are still firmly within the same mirror universe, the convincing magical reality of which is a benighted and bewitching reflection of the histories, myths, legends and folklore of our own world.

Warning: contains extreme themes and situations of a profane, violent, horrific and sexual nature. Expect adult language and situations as well as overt violence and gore!