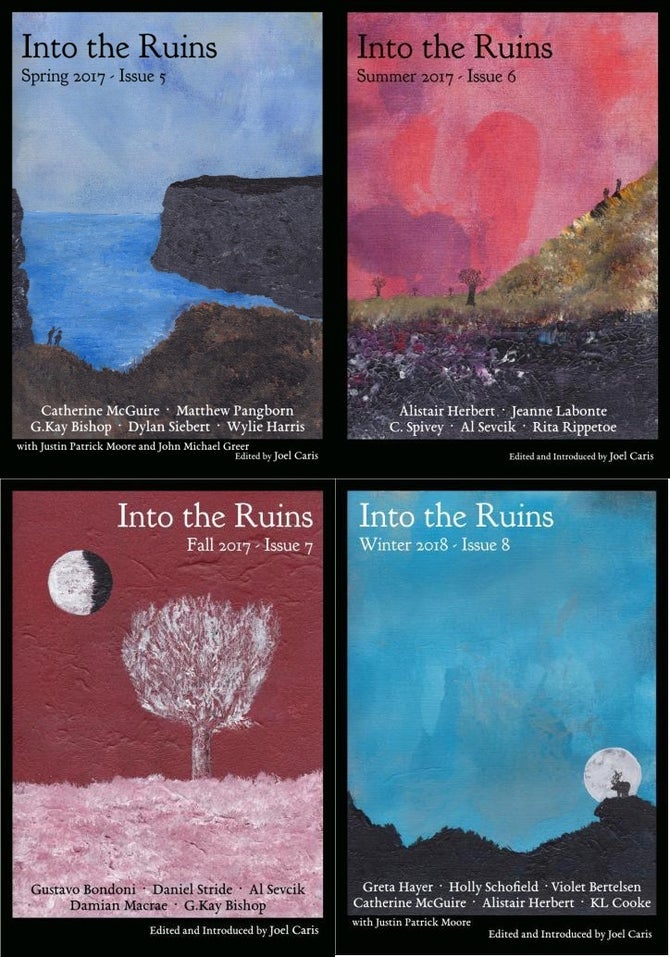 Discover the entire second year of Into the Ruins with this Year Two package. For the discounted price of just $25, you get the fifth, sixth, seventh, and eighth issues as high quality PDF downloads. This package includes nearly 450 pages of great content, including 21 fantastic stories of deindustrial science fiction, multiple book reviews, a wide variety of letters to the editor, four unique Editor’s Introductions, and more.

This is the perfect way to introduce yourself to or continue exploring the fascinating and entertaining genre of deindustrial science fiction. Pair this with the Year One package to discover all that Into the Ruins has to offer.

Descriptions of the issues included:

A naive, young government official arrives in an economically devastated midwest and soon finds himself entangled in a disturbing mystery. An expedition gone terribly wrong leads to the discovery of a hidden clan with surprising social arrangements born of disease, cruelty, experimentation, and physical pleasure. A bus ride across the deindustrialized Canadian countryside spurs a happy connection. Two men form an unlikely friendship as they work their way toward flight. And a village mentor discovers unexpected forms of darkness in her friends and neighbors, leading her to question herself and those around her.

In this fifth issue of Into the Ruins, explorations of our deindustrial future take intriguing turns both dark and delightful. These visions—extraordinary at times, rooted in an utterly normal and yet still fascinating world at others—stretch the boundaries of our imagined future. At times mysterious and thrilling, this is a new type of science fiction, offering unknown worlds found right here on earth.

This digital edition comes in a high quality PDF format, running 110 pages of short stories, editorials, book reviews, and letters to the editor.

A doctor journeys southwest from New York and finds a small community terrorized by religious fanatics. Two children follow a witch into the woods--and discover the dark secrets of the former nation they call home. A young woman chafes against the future lined out for her by others, then sets out in search of a very different kind of life. A man spends years monitoring a small river until one day a hard choice is forced upon him. And sudden, desperate visitors force the leaders of a small town to weigh a threat at the edge of their borders.

In this sixth issue of Into the Ruins, journeys and revelations abound. Ordinary people caught up in the complex web of civilizational collapse must make hard decisions, determine who to trust, and open themselves to life-altering discoveries. They travel the land in hopes of finding new lives and helping those in need--and in the process, unveil the hard and complicated futures coming for us, beset with the consequences of our current society's destruction and excess.

Anchorage has transformed itself into the newest boom town in America, growing recklessly fast but hiding dark secrets. Meanwhile, in Antarctica, a dramatically changed climate has revealed the world’s newest frontier. A man travels through the treacherous swamps of Florida, searching out a place to start a new life, while another man fleeing from past deeds finds a strange welcome in a dusty church. Another traveler meets a sly stranger on the trail and soon finds himself in a battle of wits that could prove the difference between riches and misery.

In this seventh issue of Into the Ruins, new worlds emerge from all corners of the globe, revealing the futures awaiting us on the far side of climate change and civilizational decline. These new worlds are neither apocalyptic nor dystopian, but instead a fascinating mix of new and old, well past many of the troubles of our times and struggling with new troubles of their own. These stories offer fascinating and fun futures while recognizing that human folly rings eternal.

This issue comes as a high quality PDF file nearly identical to the print version of the issue. The issues is 108 pages, in a 7x10 ratio, and includes five new works of deindustrial science fiction, an editor's introduction, letters to the editor, and a closing editorial.

This Winter 2018 issue of Into the Ruins comes as a high qualty PDF edition packed with 106 pages of stories of our deindustrial future, an Editor's Introduction, letters to the editor, and a book review.

A future seer tells a mad king his future under the threat of death. Two men isolated on a Northwest island work to re-establish contact with a devastated outside world. A powerful woman struggles with how to respond to the upcoming power shifts in both her society and home. And a man’s life is changed after a chance encounter in the forest leads to an intense love affair.

These are just a few of the stories found in this eighth issue of Into the Ruins, continuing our exploration of future worlds riven with the consequences of today’s actions. These are worlds near and far in the future, uniquely their own, giving glimpses into the sort of realities we actually do face while making clear that the worlds of tomorrow are just as compelling and complicated as the world of today.