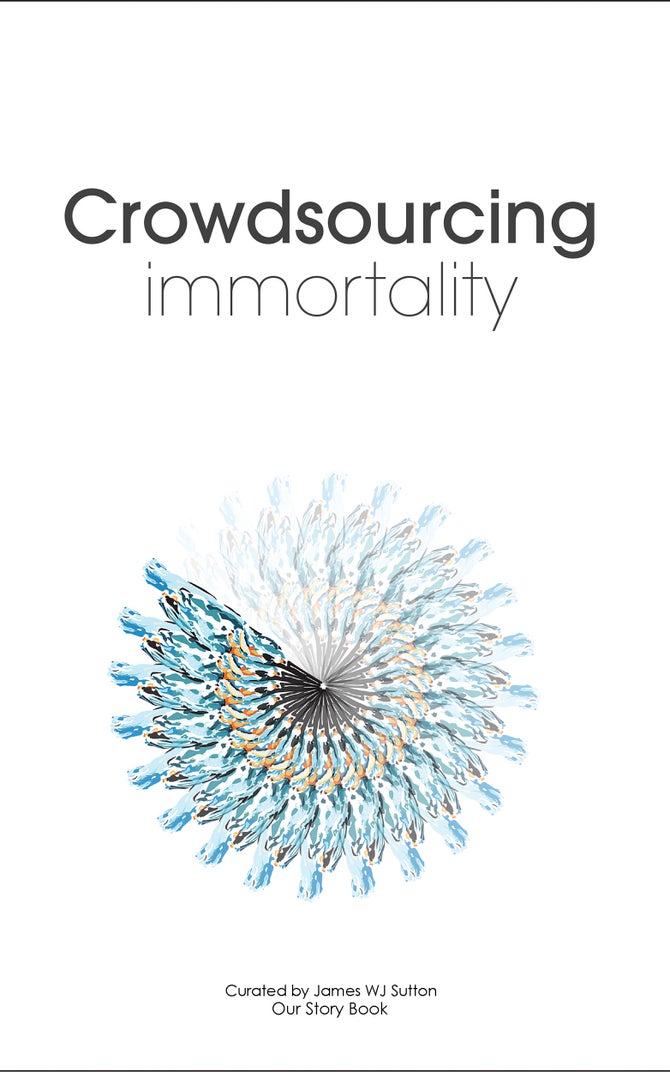 The ‘Our Story Book’ campaign launched, as an experimental project, which aims to create the first ever book about immortality that will be 100% crowdsourced on Kickstarter. The idea is to find people from around the world, from all walks of life, to each write one page of the book, just sharing their take on immortality.

The project has proven very popular, hitting its initial fundraising target within just a few days. Admittedly, a tweet from Stephen Fry to his 7 million followers did give the campaign a nice early boost, which has grown into a community of over 150 backers, with pages submitted from writers, artists, poets, thinkers, and comedians, who pledged £5 to secure their page of the book. Enabling them to tick off ‘become a published author’ from their things to do list.

The creator of this project James Sutton (28) came up with the idea after he challenged himself to write and publish his own book. When he considered how much time and effort would have to be invested to create a book, not to mention the expense of publishing, he thought he would have to delay this idea for a time when he was less busy and less broke. Then he struck on the idea of crowdsourcing the book. He thought that surely there must be lots of people out there who, like him, would like to publish a book, but cannot find the time or money to realise this ambition. Hence the Kickstarter experiment, where anyone is invited to write one page and contribute as little as £5 to the costs of the project. By making a slightly bigger contribution, backers of the campaign can also receive their very own copy of the final printed version of the book, which will be available in both paperback and hardback.

The inspiration for immortality as the subject of the book came from an experience James had several years ago. When James was 22 he discovered that he required urgent open-heart surgery for a severe aortic aneurism. Thankfully for him, he made a full recovery after undergoing heart valve replacement surgery. He now has a mechanical heart valve which his surgeon claims should last for at least 400 years. Since this life threatening experience, James has been focused on making sure the things he really wants to do in life happen, and never misses an opportunity to tick off something new from his bucket list. This has led him to travel around the world, visit an Amazon community, run a marathon, start a rainforest conservation NGO, learn a foreign language, and now try to publish a book.

This is a book about immortality for immortality; offering people not only a quick and simple way to become a published author, but also a chance at actually becoming immortal. Through capturing arguably one of the most important parts of yourself, your thoughts and ideas, into a book, you are investing in a tried and tested strategy for achieving immortality; well, at least in the romantic sense. As humans, our time is limited, but a good book has the potential to live on long after we are gone.

Along with immortalizing the muses of the everyday men and women of 2014, the book has attracted several renowned philosophers and scientists to contribute a page, the likes of Stephen Cave and Aubrey de Grey. Even world class illustrators, Milky Tea are doing a back cover for the book, and New York-based Indie publishing House Blooming Twig is getting in on the action.