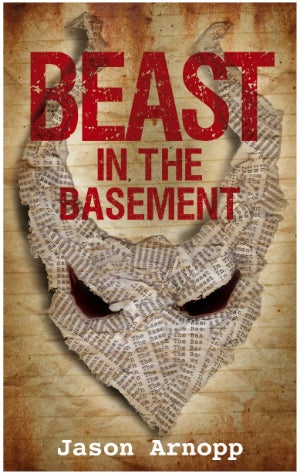 Beast In The Basement

How do you write your future, when your past won’t leave you alone?

Locked away in a huge country house, an author struggles to deliver the final novel in a best-selling trilogy. He should feel triumphant and in control, but instead he feels haunted. Tormented. The demons of his tragic past keep on dragging him

Shaken to the core after an intruder breaks into the house, the author becomes increasingly obsessed with home security. Yet no amount of CCTV cameras and live-feed monitors can ease the trauma and paranoia that threaten to consume him. When an attractive divorcee moves into the cottage across the fields, he sees his chance to escape. Dare he risk everything he’s worked for, to embrace a brand new life?

There’s one big problem. Down in the bowels of the house lurks a terrible secret. The beast. When this nameless thing escapes from the dark, the shocking truth of the author’s past comes crashing into the present. This triggers an escalating chain of events that can only end in death.

Filled with unbearable page-turning suspense, Beast In The Basement is sure to engross fans of Stephen King, Joe Hill and Gillian Flynn. Emotionally charged and with a kick like a mule, this dark psychological thriller will deliver shocks you never saw coming and leave you wondering what hit you. Countless readers have reported devouring the whole thing in one breathless session. Download it and read it now, before you get spoilered.

PRAISE FOR BEAST IN THE BASEMENT:

"I reached a certain moment and wanted to stop and applaud my Kindle. On a tube train" – Sebastian Patrick, journalist and writer/editor of the official RED DWARF site

"When the biggest turn in the story occurred, I actually exclaimed (out loud with great exuberance), "Holy ****, that is so ******* clever" – Mich Masoch, CHS REGIME

"This is enormous spooky fun and reads like lightning!" – DOCTOR WHO author Jenny Colgan

“This short sharp shock of weird horror cuts right to the quick. Writing about writers is tricky, but Arnopp handles it with beastly aplomb” – STAR WARS author Chuck Wendig

“Jason Arnopp snares his poor readers using inch-perfect plotting and compulsive suspense so that, once they're hooked, he can inflict his own dark brand of please-no horror on their unprepared psyches” – WATLING STREET author John Higgs

"Beast In The Basement is the rarest of things, a story that manages to keep you guessing right up until the end. Arnopp obviously delights in messing with his readership’s heads... I really can’t get enough of writing like this" – Pablo Cheesecake, THE ELOQUENT PAGE

"It’s a clever, intimate and sometimes oppressive tale and Arnopp takes us deep into the dark recesses of his lead character’s tormented mind as he rushes from pitiful hopelessness to elation via an unhealthy dose of desperation" – Paul Mount, STARBURST MAGAZINE

"The suspense is palpable and almost cinematic at times, the descriptions of some scenes painting themselves on the mind’s eye with HD clarity. This is a taut tale of the some of the worst excesses of human paranoia that will leave its mark on the reader long after they have finished the last page" – Chris Limb, THE BRITISH FANTASY SOCIETY

Jason Arnopp is the writer of the terrifying Orbit Books novel The Last Days Of Jack Sparks, plus fiction and non-fiction for the worlds of Doctor Who, Black Mirror, The Sarah Jane Adventures and Friday The 13th. Explore the Kindle store for his other books A Sincere Warning About The Entity In Your Home, Auto Rewind, How To Interview Doctor Who, Ozzy Osbourne And Everyone Else and From The Front Lines Of Rock. He lives in Brighton, UK, with way too many VHS tapes.