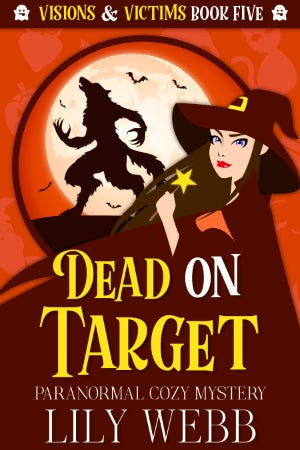 Psychic Selena feels like she's finally settling into her new life at the paranormal Kindred Spirits Inn — until a hair-raising hound swipes one of her guests. The only problem? No one can track down the shapeshifting suspect.

When a hunting party begins a search for the lethal lycan, Selena fears things aren't what they seem — and what she discovers raises her hackles.

Someone's hounding after the werewolf for all the wrong reasons, and they'll stop at nothing to make sure they bag the beast.

Can Selena's visions spare the shapeshifter? Or will she be the next to take a silver bullet?

Dead On Target is the fifth book in the Visions and Victims series of paranormal cozy mysteries. If paranormal pariahs, heartless hunters, and magical mysteries get your wand waving, then you’re sure to fall under the spell of this new spinoff series that expands Lily Webb's magical universe.

Buy Dead On Target to continue conversing with the spirits of Starfall Valley today!