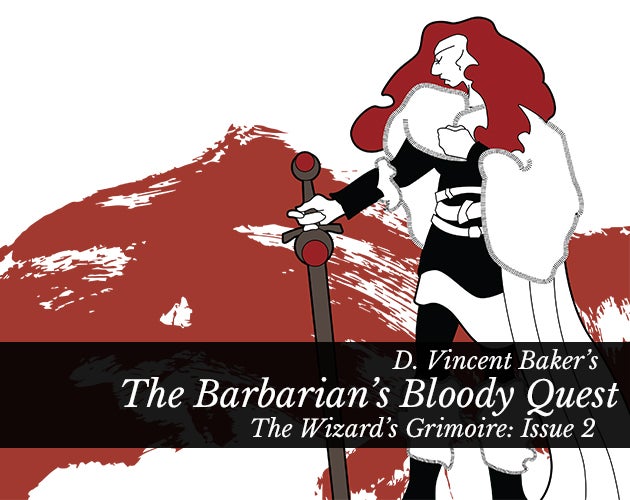 On Sale
$15.00
$15.00
Added to cart
A wizard once came to the mountainside village where you were born and lived. You were a child. You remember the wizard as a terrible, nightmare figure — man or woman, beautiful or grotesque, you’ll never remember. Your parents hid you and you couldn’t see what happened. The wizard summoned fearsome creatures in armor who butchered your family and all the people you ever knew, butchered many and enslaved the rest for the wizard’s use. You stayed hidden and they never found you.

You were soon taken in by your village’s enemies, a clan of blood-thirsty raiders and brigands. They adopted you not out of mercy or kindness, but indifferently, simply to replace one of their own who had been killed in battle.

You were theirs for two decades, raiding, fighting, murdering, robbing. You found yourself fearless, throwing yourself into deadly peril with no thought of hesitation, driven by the roaring of your blood. You found yourself powerful, strong, and skilled. You wondered if you were conscienceless. At last, not long ago, awash in gore, your sword in your hands, your heart reawoke and you realized who you are.

You’re a killer, but you’ll no longer kill people for their wealth, for pride of place, or to ease your own bloodlust. You’ll kill wizards, and you’ll kill them for revenge. Let all wizards beware!

A wizard murdered and enslaved your people. Now you're among strangers, on a bloody quest for revenge. Let all wizards beware!

To play The Barbarian's Bloody Quest, you need two volunteer GMs (or more than two, it's fine) to play against you. You have your booklet of rules, which you're responsible for knowing and bringing into play for yourself, and your volunteers have their own document: "The Book of Doomed Wizards," their guide to the wizards you'll face on your quest. Don't read it! It's for them, not for you.

Your goal in the game is to follow your quest for revenge into danger, and to emerge victorious when you can.

Each session that you play is an adventure in your barbarian's quest: an encounter with a wizard, whose magics you'll face and whose magical defenses and guardians you'll hope to defeat. You can play as often or rarely as you like, and you can call upon the same volunteers, or different ones, every time you play. Just pass The Book of Doomed Wizards over to them so that they can mark your progress through it.

The Barbarian's Bloody Quest uses a dice pool version of Powered by the Apocalypse's moves. Here's they're called exertions, and they describe how you exert yourself to get things done:

When you exert yourself, roll a number of 6-sided dice and count the 4s, 5s, and 6s as hits. Each hit you roll gives you an option, a chance, or a better outcome.

The Book of Doomed Wizards

"The Book of Doomed Wizards" contains all of the wizards you might encounter in your quest. It gives your volunteers everything they need to help you pursue your vengeance:

As you play through your quest, your volunteers also record your adventures in the Book of Doomed Wizards.

To celebrate a successful kickstarter, we've added a second character to The Barbarian's Bloody Quest!

You are a wastrel, a hedonist, and a thief. You love the weight of coins in your hand, and you love the way they ring against each other when you spend them. You take pleasure in your life, expecting it to be short, clinging to little.

You’ve fallen in love, to your embarrassment, with a barbarian: a breathtaking creature, brooding, self-serious and intense, come into your city now to prosecute a blood-feud too bizarre for you to question.

That you can help this dangerous outlander find their way in your city, there’s no doubt. What they’ll make of you, and whether they’ll return your love, you must find out!

The Barbarian's Bloody Quest - Printouts (pdf) contains the pages you'll need to print in order to play. Print two copies of the Volunteer's Guide and the Bestiary, for your two volunteers, and a copy of the Wizard character sheet for yourself.

The Barbarian's Bloody Quest eZine (pdf) is the digital version of the barbarian's booklet, including the rules of play.

The Book of Doomed Wizards eZine (pdf) is the digital version of the volunteers' booklet, including the wizards you'll face on your quest.

The Barbarian's Bloody Quest - Plaintext (txt) is the plaintext version of the complete game, both the barbarian's booklet and the Book of Doomed Wizards.

The Barbarian's Companion (pdf) is the digital version of the thief's booklet.

The Barbarian's Companion - Printouts (pdf) includes the thief's character sheet, plus versions of the Volunteer's Guide and the Bestiary.

The Barbarian's Bloody Quest is second in a series of zine-sized tabletop rpgs that share a world and a system. In the first game, The Wizard's Grimoire, you're an ambitious wizard with a grimoire beyond  your arts. This game turns the tables: now you're a warrior and wanderer sworn to vengeance upon the wizard who wronged you.