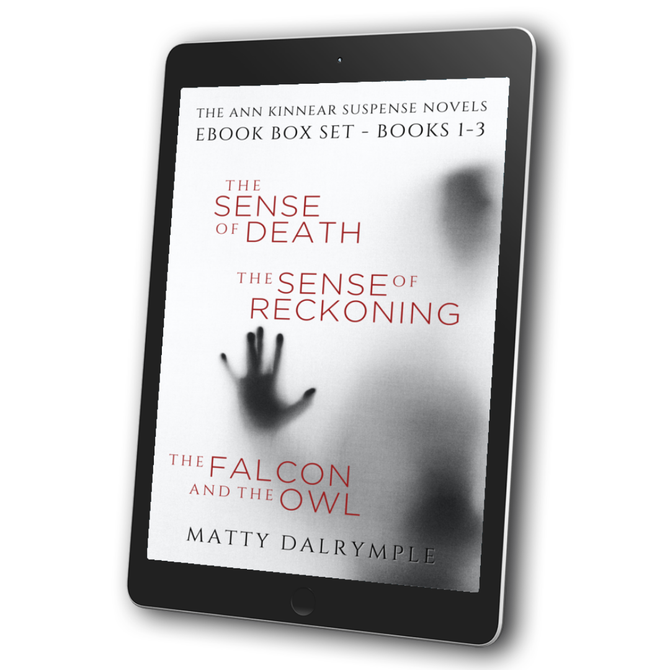 By Matty Dalrymple
You will receive this ebook in epub, mobi, and pdf formats, and will have the option of downloading directly from PayHip or (even easier) from BookFunnel!

From an Adirondack cabin that starts as a refuge and becomes a trap ... to the high society of Philadelphia's Rittenhouse Square and Main Line ... to the craggy beauty of Mount Desert Island, Maine ... to a general aviation airport struggling to survive, Ann Kinnear evolves from a woman whose past has punished her for practicing her spirit-sensing abilities to an expert whose skill rivals that of her sometimes-mentor, sometimes-competitor Garrick Masser.

The dead have secrets they're willing to share, and Ann Kinnear can hear them ... but they can be secrets that someone is willing to kill to keep.

This ebook box set includes the first three Ann Kinnear Suspense Novels: THE SENSE OF DEATH, THE SENSE OF RECKONING, and THE FALCON AND THE OWL.

THE SENSE OF DEATH

Ann Kinnear thought the job was just another sensing-for-hire ... until she realized that the woman in the Philadelphia townhouse was the victim of murder. Will Ann be able to bring the victim's killer to justice—or will she pay the ultimate price herself?

Ann Kinnear has created a peaceful existence at her cabin in the Adirondack woods. But the calm is shattered after socialite Elizabeth Firth is reported missing. With few clues and fewer options, Detective Joe Booth calls upon Ann's spirit sensing abilities to help solve the mystery, and to uncover what Elizabeth's husband is hiding beneath his cloak of wealth and privilege.

As Ann is drawn deeper into a web of lies and betrayal, will its fatal threads snare her as well?

THE SENSE OF RECKONING

Ann Kinnear thinks that her midnight visit to a shuttered Maine hotel with a haunted past is simply a favor for a friend ... until she finds that more than secrets are buried there. Will Ann be able to unlock the secrets hidden within those walls, or will she succumb to an eternity trapped there herself?

After solving the Philadelphia Socialite murder, Ann Kinnear should be riding high. Instead, she's depressed and considering abandoning her spirit sensing business. To add to her problems, she has suffered a series of injuries to her hands—could these be the ghostly repercussions of the violence that ended her last case?

Ann goes to Maine to solicit help from fellow spirit senser Garrick Masser. Ann and Garrick find more trouble than they bargained for in a tale of obsession and misplaced loyalty that has its roots in a crumbling summer hotel, international art theft, and the historic wildfire that raged across Mount Desert Island in 1947.

Will Ann be able to fit together the pieces of the puzzle, or will she miss the vital piece ... and its warning of the danger that lies in wait?

THE FALCON AND THE OWL

A small plane crashes in the Pennsylvania Wilds ... and only Ann Kinnear has the ability to discover the force that brought it down. Will the secret the victims carried die with them, or come back to haunt her?

Ann Kinnear is indulging her love of aviation by working toward her pilot’s license at Avondale Airport—and protecting her privacy by discouraging the attentions of a filmmaker intent on documenting her spirit-sensing abilities.

Little does she know that a fiery plane crash in the Pennsylvania Wilds will embroil her in a race to track down a contract on which two rivals are banking their futures. And when airshow pilot Gwen Burridge launches a smear campaign against Ann, she is even more determined to uncover the truth.

Ann travels to the crash site and learns what brought the plane down—but it’s only part of the story.

Will Ann land safely, or be the latest victim of a secret someone is willing to kill to keep?