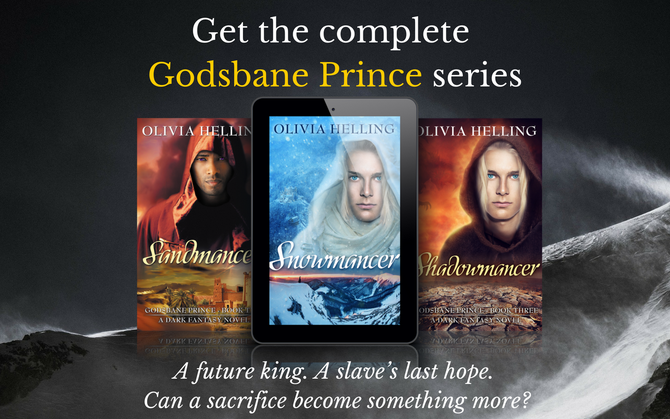 A future king. A slave's last hope. Can a sacrifice become something more?

Ilyas wants someone he can trust. As the heir to a great kingdom, all he can count on is the treachery of his younger brothers as he protects his future throne. When he receives his latest spoils of war, he meets a slave who’s different. A slave with a hidden agenda…

Jem is the last chance for his people. Shunned by his brethren, he yearns to save them with an impossible task: kidnap Prince Ilyas and sacrifice him to Jem’s Dark God. Against all odds, he captures the prince and carts him across the frozen wasteland.

Now Jem must keep Ilyas safe for the sacrifice and push down his urges to do more than protect the heir to the throne. Ilyas knows he can’t trust the slave, but he feels like he’s finally found a man he can love. As their attraction builds, they grow closer to a god that could destroy them both.

Snowmancer is an LGBT dark fantasy novella set in a far-off kingdom. If you like unpredictable plot twists, rich descriptions, and tantalizing chemistry, then you’ll love Olivia Helling’s incredible tale of adventure, sacrifice, and love.

Bonded soul mates. Shocking secrets. Protecting the one he loves could destroy everything…

Ilyas defeated the Dark God and won the spoils of a lifetime: a new kingdom, a new soulmate, and a chance at revenge. Just when he has the chance to humiliate the brother who sold him out, Ilyas learns a closely-guarded secret. He has a son, and now he’ll do everything he can to protect him.

Jem’s life was pure loneliness before he met Ilyas. But with the Dark God thwarted, Jem is completely powerless. When Ilyas begins to devote his full attention to the baby, Jem becomes determined to win his soulmate back.

After allying with a powerful secret society, Jem conspires to deliver an uninhabited world where Ilyas’ young son can truly be safe. But Jem didn’t realize that his new alliance comes at a high price, one that may cost him the love of Ilyas forever.

Sandmancer is a spellbinding LGBT dark fantasy novel. If you like rich world-building, captivating storytelling, and edge-of-your-seat action, then you’ll love this story of love and horror from Olivia Helling.

Ilyas refuses to give up his power. Not in the negotiations with his kingdom's old enemy, and not in his relationship with the man he loves. To keep the possibility of victory all to himself, Ilyas shuts Jem out of the talks and puts their love at incredible risk…

Jem can no longer trust his own mind. While Ilyas has helped keep his inner demons at bay, the vessel of the Dark God senses the void growing between them. When the shadowmancer arrives at the negotiations, Jem keeps a close eye on a foe who seems to have won over everyone but him…

As Jem uncovers the shadowmancer’s true purpose, nobody believes him, including Ilyas. Before a dormant, deadly menace is released, Jem’s only chance to save the peninsula and his soulmate is to embrace the monster he was made to be…

Shadowmancer is the riveting final installment in a trilogy of LGBT dark fantasy novels. If you like gay romance against all odds, action-packed adventures, and far-away fantasy worlds, then you’ll love Olivia Helling’s engaging tale.

Buy the complete Godsbane Prince series to warm up to a forbidden love story today.