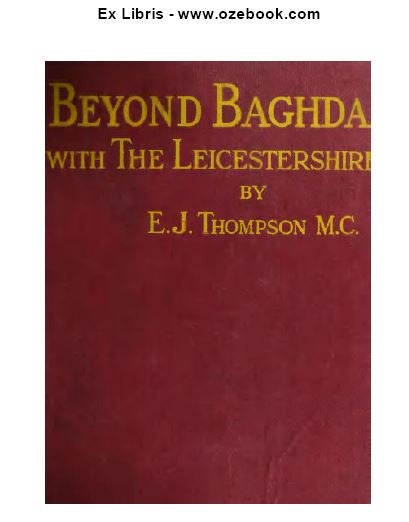 The Leicestershires beyond Baghdad by Edward John Thompson - Published 1919

The Leicestershires beyond Baghdad by Edward John Thompson - Published 1919
The Mesopotamian War was a side-show, so distant from Europe that even the tragedy of Kut and the slaughter which failed to save our troops and prestige were felt chiefly in retrospect, when the majority of the men who suffered so vainly had gone into the silence of death or of captivity. When Maude's offensive carried our arms again into Kut, and beyond, to Baghdad, interest revived; but of the hard fighting which followed, which made Baghdad secure, nothing has been made known, or next to nothing. The men in Mesopotamia did not feel that this was unnatural. We felt, none more so, that it was the European War which mattered; indeed, our lot often seemed the harder by reason of its little apparent importance. Yet, after all, Baghdad was the first substantial victory which no subsequent reverse swept away; and it came when the need of victory, for very prestige's sake, was very great. Mr. Candler has written, bitterly enough, of the way the Censorship impeded him in his work as official 'Eye-witness.' His was a thankless task; as he well knows, few of us, though we were all his friends, have not groused at his reports of our operations. A long, drawn-out campaign in appalling conditions that was initially about protecting British oil interests but later gave rise to visions of glittering prizes in the capture of Baghdad and the crushing of the Turkish Empire in conjunction with the Russians.