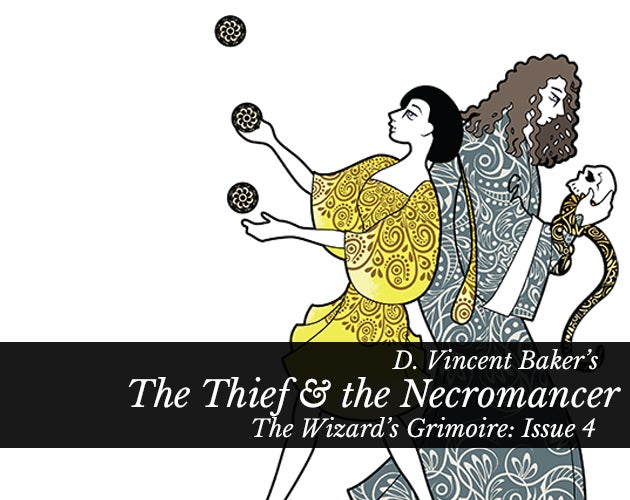 The Thief & the Necromancer

When you were young, you were taken by a notorious necromantic cult and bound by enchantment into their service. You were useful to them: unflinching and eager, fearing neither the rigors of the stilling-room nor the dread of the charnel halls.

As you grew, though, you discovered the limits of the sorcerous binding laid on you. With the help of your ghostly tutor, Goerne, you broke the seal on your mind and fled your masters.

By chance you met and made a friend, a thief and street performer, restless and, like you, hungry for a life of achievement. You’ve taken together in mutual amity, and now you pursue your own ambitions and seek your own power far from the cult's reach.

You were raised by a cruel and demanding family, forced to perform tricks and antics in the street for small coins — and when the coins were too few, forced to steal.

One day: enough! You met and made a friend, a necromancer as restless and ambitious as you. With your friend you slipped your family’s reach, departed their accustomed routes, and set out for better fortunes in other cities.

Let the world beware of what you will accomplish together!

You're friends, one a gifted necromancer, the other a thief and street performer. You've both escaped bad situations and you've thrown in together to take on the world.

To play The Thief & the Necromancer, you need two volunteer GMs (or more than two, it's fine) to play against you. You each have your booklet of rules, which you're responsible for knowing and bringing into play for yourself.

Each session that you play is an episode in your adventure together: a new place you arrive, new people you meet, new dangers you face, new opportunities to pursue your ambitions. You can play as often or rarely as you like, and you can call upon the same volunteers, or different ones, every time you play.

The Thief & the Necromancer is the fourth game in The Wizard's Grimoire zine series. It's a complete, stand-alone game; you don't need any of the other issues (The  Wizard's Grimoire, The Barbarian's Bloody Quest, or The Last Adventure) to play it.

The games share a world and a rule system, but each one has its own unique adaptations and quirks. The Thief & the Necromancer includes rules for adventure, escapades, and danger, and rules for summoning and studying at the feet of a ghostly tutor as well.

The Thief & the Necromancer uses a dice pool version of Powered by the  Apocalypse's moves. Here they're called exertions, and they describe how  you exert yourself to get things done:

When you exert yourself, roll a number of 6-sided dice and count the  4s, 5s, and 6s as hits. Each hit you roll gives you an option, a chance, or a better outcome.

The Wizard's Grimoire, available now: The first issue! You're an ambitious wizard with a grimoire beyond your arts. Unlock it and discover the wizardry within. Includes a challenging 1st-level grimoire: "The Signature of Aibesta of the Two Courts."

The Barbarian's Bloody Quest, available now:  A wizard murdered and enslaved your people. Now you're among strangers, on a bloody quest for revenge. Let all wizards beware! Includes "The  Book of Doomed Wizards."

The Last Adventure, available now: You're a warrior, champion, and monster slayer. Now you've come to die, but on death's shore, neither family nor ancient heroes greet you. Take up the memory of your sword, the memory of your shield, and make your last adventure here, in the land of death!

The Wizard, the Warrior, & the Wastrel, coming soon: A guide and rules for including more players and switching up the solo adventure format of play. For use with any of the games.

The Wizard's Library, coming soon: Includes "The Dictum of  Polume the Farer," "The Three Scrolls of Jorvelte Wild-Crowned," and "The Red Tome of Salabrusto the Wise," for use with The Wizard's Grimoire or The Thief & the Necromancer.
You will get the following files: