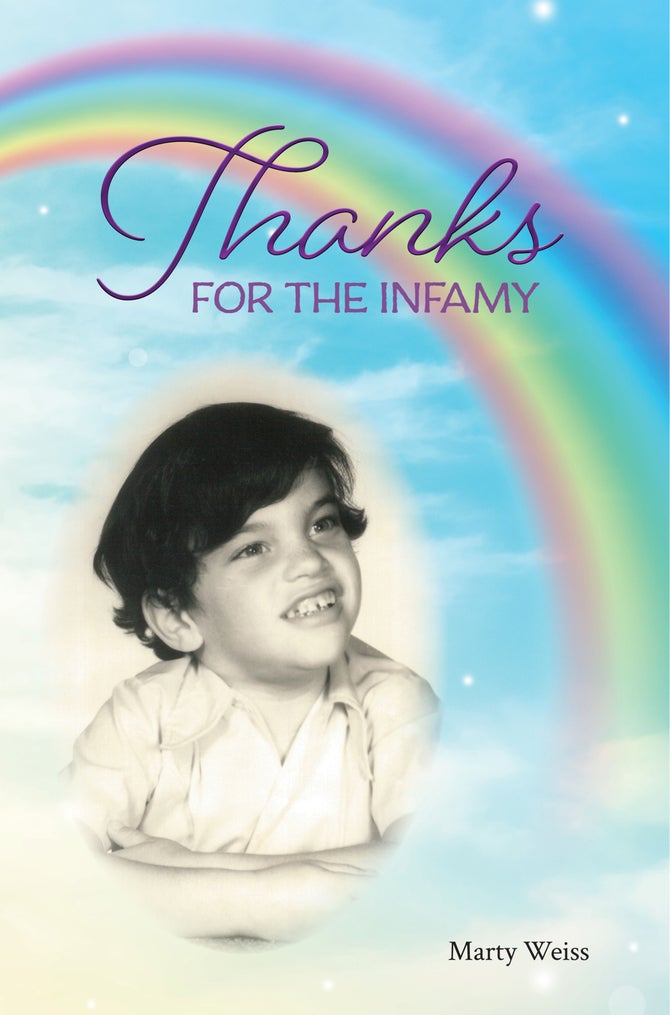 Thanks For The Infamy

By Marty Weiss
He grew up in a nightmare, then lived the Hollywood dream... only to find a new nightmare.
The story of the little gay-boy who could… until he became society’s most-hated villain.

THANKS FOR THE INFAMY

A tabloid “tell all,”
A survival story,
A valuable prevention guide,
A memoir with a message.

Traumatic events early in life can damage the maturity process and set into motion a cycle of abuse. Understanding that cycle, catching the warning signs in time, can alter future improper sexual behaviors.

Marty Weiss gives us a glimpse into the complexity and nuance that influence decisions to sexually harm. His experience shows us that good people can make bad decisions and that those decisions are often influenced by their own harmful experiences.

Growing up weak, bullied, and gay, Marty Weiss suffered from multiple abuses. Finding his voice and strength while studying at Arizona State University, he served as president of the campus gay club. He used his news writing and networking skills to develop entertainment industry contacts. After graduating, Weiss worked as a Hollywood publicist, entertainer and talent manager until his 2011 arrest for engaging in sex with a minor. Today he uses his experience as both a former victim and ex-offender to help other victims, registrants, and their loved ones.

His autobiography, with many never-before told Hollywood stories, will teach society to better understand the cycle of victimization, knowledge that could lead to prevention techniques possibly saving countless children in the future.