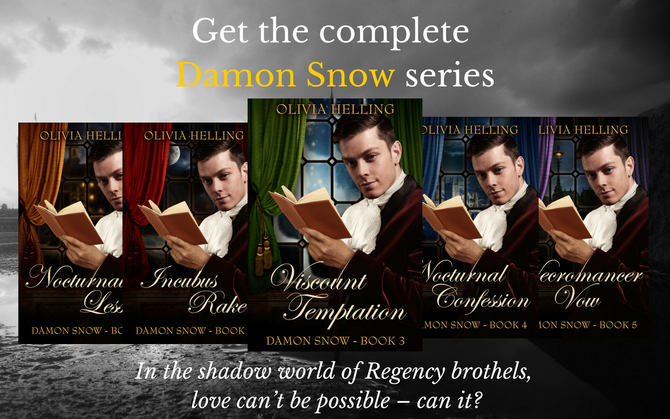 He thought love was impossible, until his cull’s dying wish...

London, 1809. Incubus demon and male prostitute Damon Snow thinks he has the world figured out. Love only exists in rich poets’ imaginations and all any man wants from him is a quick romp. But when his long-time and dying patron forces Damon to investigate true love, he discovers that love may be possible for those lucky few — and that possibly, just possibly, love is possible for him too.

Nocturnal Lessons (Book 1)
In the dark world of Regency molly houses, love can’t be possible – can it?

Damon Snow thinks he has the world figured out. As an incubus demon and male prostitute, the world is a cruel, dark and lonely place where men only want one thing.

There's only one catch: Damon has to investigate and write about the reason another patron Price visits him. Easy – the same reason as all men.

But what starts as an easy assignment turns into an impossible secret, the last thing Damon would ever suspect. If men only want one thing, how can one possibly fall in love?

Incubus Rake (Book 2)
In the dark world of mollies and incubi, who can Damon really trust?

Incubus and prostitute Damon Snow wants nothing more than a repeat of his last fateful visit with his long-time patron Byrne. Not that he’d actually admit that. Week after week, Byrne’s door remains closed, until Damon discovers he’s not the only one paying Byrne a bedside visit.

Even Damon’s only friend Rogers seems ready to discard him if he ever does get into Damon’s pantaloons.

So when a dapper rake reveals himself as an incubus and offers to teach Damon how to bend men to his desires, Damon is quick to take him up on his offer, even if it means breaking a few of his own rules.

But the rake has a secret of his own, and men keep disappearing around him. In a world of only users and the used, who can Damon really trust?

Viscount Temptation (Book 3)
In a world of buyers and the bought, can Damon afford to choose love?

The only thing incubus and prostitute Damon Snow wants for his dreaded “twenty-first” birthday is to spend the day at Byrne’s bedside. But Byrne is growing ever more distant.

Claiming it’s due to his ongoing struggle with his business partner, Viscount Ashton, Byrne assigns his next lesson: Damon will seduce Ashton into ceding to Byrne.

Damon desperately needs the extra money. As much as he’d prefer to stay in Byrne’s bed, he can’t refuse, and seducing the wanton creature he’d seen so many years ago seems easy enough.

But when the viscount offers Damon the respectable and lucrative position of valet, it comes with one catch: he’ll never see Byrne again. When it seems like even Byrne regards Damon as little more than a whore to be bought, can Damon afford the choice?

Nocturnal Confession (Book 4)
In a world of incubi and unicorns, there must be something capable of curing Byrne… right?

For months, incubus and prostitute Damon Snow has been given assignments from his long-time cull and now lover Byrne. But after Byrne nearly dies and they travel to Bath to take the waters, Damon assigns himself one of his own:

He must find a supernatural creature capable of curing Byrne.

But when Damon once again encounters the incubus Frost, Frost taunts him with the truth ― Byrne isn’t dying from natural causes. Damon’s touch is killing him.

Damon has to find a cure, and fast, even if he must break propriety and sanity to do so. But can he go so far as to confess he’s an incubus knowing he’ll lose Byrne forever?

A dying lover. A demonic foe. One confession could save them all...

Damon knows he shouldn’t need aid to stay at his dying lover’s side. But as Byrne deteriorates, Damon bolts to take solace in his friend and fellow molly, Rogers.

Rogers will always be there for Damon – if Damon would ever open up. He even risks a trip home to cheer him up, only to be stalked by his old demonic foe.

But when Damon invites him into their home, Rogers can’t keep the skeletal demon a secret. Not when the demon threatens to steal Byrne’s precious last days.

Damon and Rogers must band together to stop it – if they can ever admit they need the other’s help.

Necromancer Vow is the fifth book in the gay historical fantasy Damon Snow series. If you love deep emotional tension, Regency-era London and deviant romance, then you’ll love this latest story of love, hurt and comfort from Olivia Helling.

What other readers are saying about Nocturnal Lessons:

“One word kept coming to mind as I read the novella: Darling. It was hot and sweet yet realistic, giving you the darker emotional side of being a Molly. I cannot wait for Damon’s next lesson.” ~ Wicked Reads

“The story, while short, develops wonderfully and kept me engaged.” ~ Wicked with Ink

Buy the complete series now and save 30%.