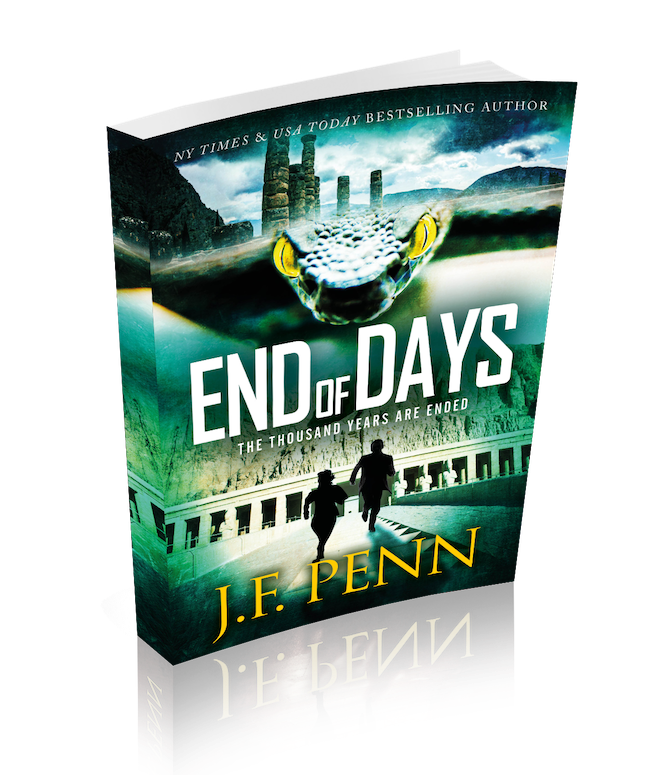 By Joanna (JF) Penn
A buried sarcophagus locked by seven seals. A prophecy that heralds the End of Days ...

A marble tablet found in the ruins of Babylon warns of the resurrection of a banished serpent in the final days. A sarcophagus is discovered in the deepest ocean, locked by seven seals scattered throughout the ancient world.

As the Brotherhood of the Serpent race to find the seals before a rare lunar eclipse over the heart of Jerusalem, ARKANE agents Morgan Sierra and Jake Timber battle to find them first.

But this time, evil threatens to destroy all that Morgan loves and she must wrestle an apocalyptic foe as well as fighting to conquer her own fears.

In a fast-paced adventure from the ruins of Iraq to the snake-handling churches of the Appalachian Mountains, from archaeological digs in Israel to the tombs of Egypt, Morgan and Jake must find the seven seals and stop the resurrection of an evil as old as mankind. An evil that will usher in the End of Days.

End of Days is Book 9 in the ARKANE action adventure thriller series, but can be read as a stand-alone story.

Downloads include mobi for Kindle, ePub for other eReaders, and PDF