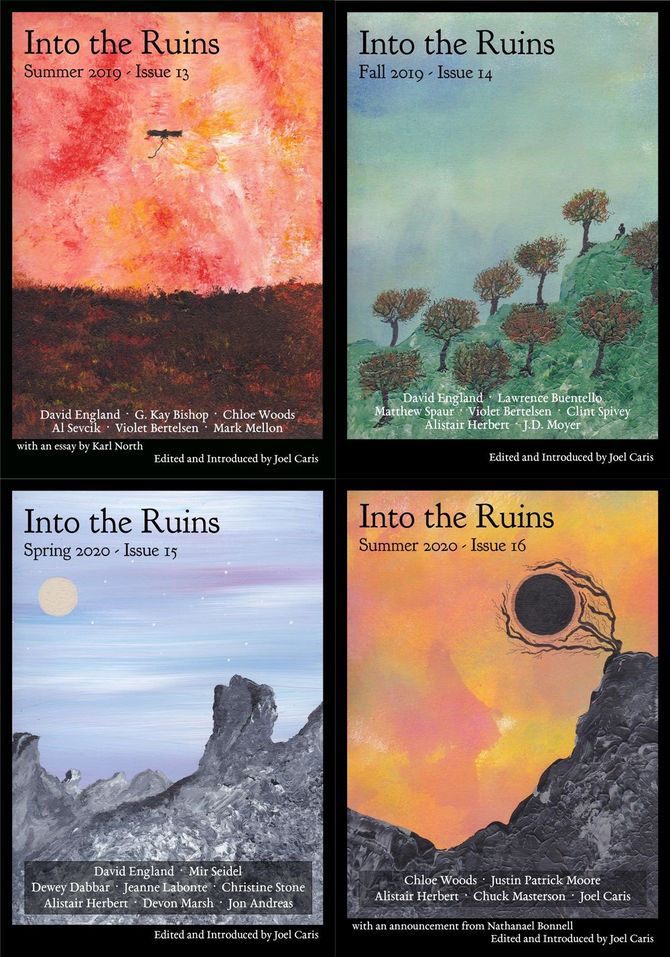 By Figuration Press
Discover the entire fourth year of Into the Ruins with this Year Four package. For the discounted price of just $25, you get the 13th, 14th, 15th, and 16th issues as high quality PDF downloads. This package includes nearly 450 pages of great content, including 25 fantastic stories of deindustrial science fiction, an intriguing argument from Karl North about the potential for a new Gothic Age in a deindustrialized United States, a wide variety of letters to the editor, four unique Editor’s Introductions, and reviews of Richard Powers' The Overstory and 10 Billion, a visual adaptation of John Michael Greer's story "The Next 10 Billion Years."

his is the perfect way to introduce yourself to or continue exploring the fascinating genre of deindustrial science fiction. Pair this with the Year One, Year Two, and Year Three packages to discover all that Into the Ruins has to offer, receiving the magazine's full run. Already have your copies of the magazine? The Year Four package makes a great gift for someone who has yet to discover Into the Ruins.

Descriptions of the issues included:

Veering from high seas adventure to a future academic treatise on the peculiar swimming habits of our industrial age, from the conclusion of Violet Bertelsen’s stellar novella, The Ghosts in Little Deer’s Grove, to the triumphs and challenges of a low-energy future lived down on the farm and out on the hunting grounds, this newest issue of Into the Ruins continues to present fascinating visions of our deindustrial future.

Meanwhile, an intriguing argument from Karl North about the potential for a new Gothic Age in a deindustrialized United States rounds out this issue, providing plenty of fodder for thought about what our future holds.

What might the deindustrial future bring? Cut off inhabitants in a flooded California face a furious storm; the residents of an island of refuge must determine the fate of unnerving visitors; a desolate landscape is visited by a series of mysterious and haunting musical notes; and one final, critical act determines the outcome of a new Civil War.

These possibilities and more await in the pages within, weaving tales of the future that refuse to bow to the assumptions of our times and instead ask us to imagine what might come from the choices we face, and in what ways we might yet forge futures of meaning in the hard times ahead.

The world of today is a distant memory in many of the stories within, while in others the near future brings strange surprises. Baseball still reigns supreme in New England as the rest of the world falls apart, somehow never negating the false hopes of small-town citizens. In a Greenland remade by climate change, a mysterious girl transforms the life of a strange young boy. Meanwhile, a surprising message from another solar system may hold important truths about our own civilization-while in another story, the last remnants of a perished society await in a cave, harboring their own truths about the new world outside. These stories and more bring us ways of imagining the future that awaits us all, asking us important questions about the realities of today, and what they may become tomorrow.

Into the Ruins brings its four year run to a close with a final issue featuring a number of old friends offering new visions of our future. From a time in which any semblance of compromise is an excuse for ostracization, to one in which the dreams of escape into space clash with the harsh realities of making a living during decline; from one man's journey to escape alcohol and discover a new life, to another man's nightly remembrance of a former life through the final broadcasts of a big city radio station; and onward to a mid-twenty-first century ranch in eastern Washington and the sudden murder that threatens to tear it apart: these stories once again bring to life futures not driven by apocalypse or utopia, but by the erratic and grinding changes most often brought by the real world.

Wrapping up with a review of the new graphic novel 10 Billion, and the exciting announcement of New Maps, a new deindustrial fiction magazine by Nathanael Bonnell, this issue serves as a fitting close to Into the Ruins, as well as a promise of many newly imagined futures to come.