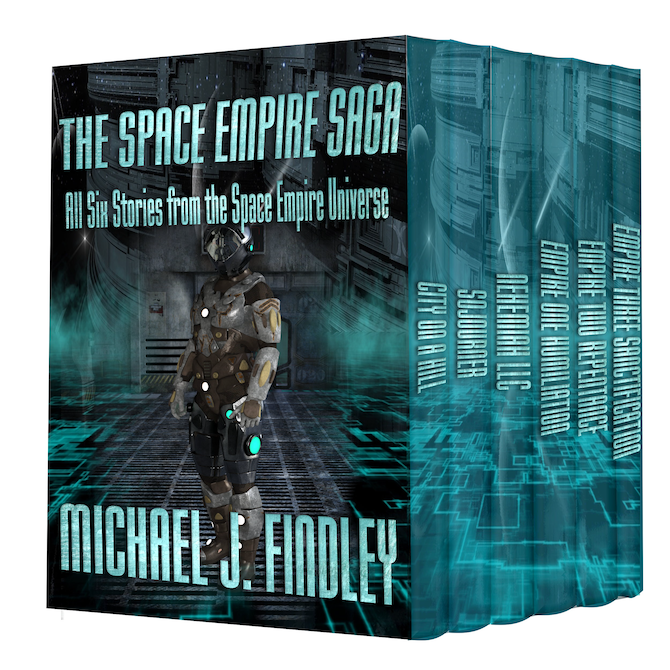 Empire Saga: All Six Stories from the Space Empire Universe

By Findley Family Video Publications
All Six books set in the Space Empire Universe in one volume. Persecution of believers in Christ is already happening. Many of the details of "City on a Hill" are not Science Fiction but current events. One day soon the only refuge for the faithful may be space.

Follow the founding of the once-godly Space Empire through its degeneration in "Sojourner," where a desperate couple fights loneliness and equipment malfunction to pioneer piloting a gas-collecting balloon ship to the outer planets. Their "rebellion" against the corrupt government opens the outer reaches of the Solar System to exploration.

In "Humiliation," Michael, crown prince of the Space Empire, finds that he is not alone in his quest to build an advanced deep-space battle-ready vessel. Mysterious ships bearing scarlet crosses pursue his convoy and expose conspiracies against the Space Empire from within and without. Michael's adoptive brother Randolph follows him to exile on Earth and a summer of biblical teaching at Jonathan Edwards' camp meetings. Forbidden romance leads to tragedy, political turmoil, and a meeting with representatives of Earth's mysterious Fourth Empire.

In "Repentance," Michael reconciles with his father but must find a way to save the Palace, Randolph, and the earth woman Aidan from the attacks of the Church and Earth's hopelessly corrupt system. In "Sanctification," treachery closes in on all sides. Michael makes shattering decisions that may save or destroy the Space Empire's last hope for the future.