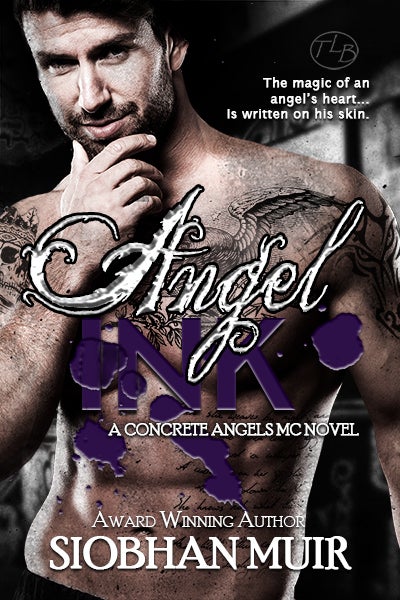 By Siobhan Muir
Angels, Art, and Abduction: The magic of an angel’s heart…is written on his skin.

I was minding my own business, trying to escape a party, and walked straight into a murder. Which would’ve been the scoop of a lifetime if my phone hadn’t died. And the door hadn’t locked. Now I’m stuck in a cabin in the mountains with a hot guy who appeared on the street like my knight on shining motorcycle, and I should be more worried than attracted. I mean, he’s covered in tattoos and is VP from the notorious Concrete Angels MC, the same group I’m investigating. Because I know they’re involved with the deaths of a U.S. Marshal and two FBI agents. My love life luck sucks.

Love isn’t something that archangels ever expect to feel. At least not the all-consuming, no-holds-barred kind of love spoken about in films and songs. But that’s what I felt the moment I laid eyes on Haley. She doesn’t know I’m not human, or just how inhuman the rest of my MC is, but I can’t stay away from her if I tried. Now I have to protect her – not only from the men hunting her, but also from the truth. The question is: will she stay when she finds out what I really am? Because if she can’t be trusted with the truth, Loki will make sure she can’t pass on the information. Permanently.