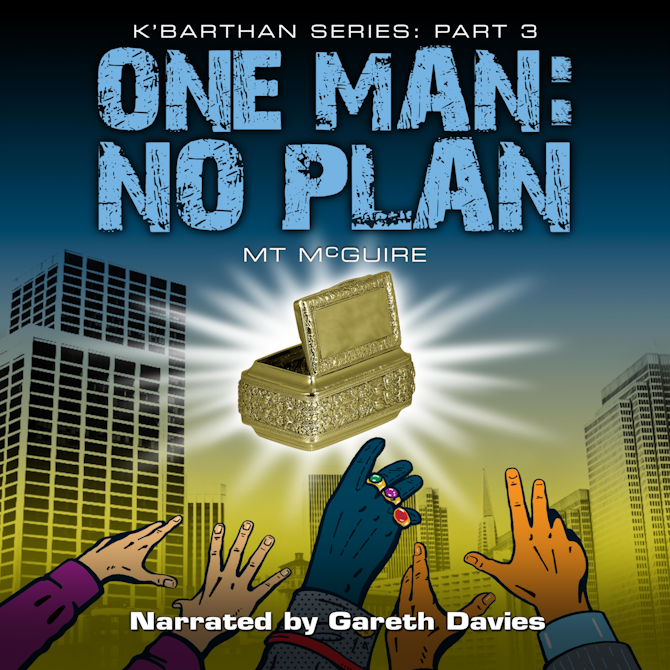 One Man: No Plan, Audiobook

By Hamgee University Press
The Pan of Hamgee needs answers, although he’s not even sure he knows the questions.

He has a chance to go straight but it’s been so long that he’s almost forgotten how. Despite a death warrant over his head he is released, given a state-sponsored business, and a year’s amnesty for all misdemeanours while he adjusts. On the down side, Ruth has thrown in her lot with his nemesis, Lord Vernon.

The Pan doesn’t have a year, either. In only five days Lord Vernon will gain total power and destroy K'Barth. Unless The Pan can stop him. Because even though the Candidate, the person prophesied to save K'Barth, has finally appeared it's still going to be down to The Pan to make things right. But he has no clue where to start or whether he even can.

The future hangs by a thread and the only person who can fix it is The Pan: a man without a plan.

Estimated UK film rating of this book is: PG (parental guidance) things get pretty black in places but there is also light.

'Brilliantly written, nicely paced, it was a real pleasure to read. I enjoyed it so much I bought the fourth one as soon as I finished the last chapter. Indie publishing at its best.' - Rick Trivett on Amazon, January, 2015

When you buy this audiobook it will be delivered to you by email shortly after purchase. This is because the audio files are a bit big to download from here so I have used Bookfunnel to deliver them to you.

What you can download from here is a ReadMe.docx file that explains everything about how that happens in more detail.